Reports of Vaccines deaths and adverse reactions are becoming hard to ignore.  Journalists are finally getting curious enough to interview doctors that are not high priests in the COVID cult.  One of the skeptics now generating interest is Dr. Robert Malone.  I posted a rather long interview he gave a couple weeks ago.  This time he is interviewed by the Epoch times.

Not only is Dr. Malone a lifelong vaccine advocate but he invented mRNA vaccines.  He is probably the most qualified person in the world to be discussing Vaccines.  That makes him a real problem for the Covidians.  Dr. Malone does not agree with Vaccinating everyone.

Dr. Malone covers a lot of ground in this interview making some very important points along the way.  I want to discuss a few of them.  The interview starts with a discussion of a recent study concluding the risk/reward ratio for COVID vaccines is not good for young people.  Immediately this study was attacked by the Covidians.  The main criticism is that the VAERS database is inaccurate because it is voluntary.  Below is Dr. Malone describing the criticism from the Covidian “fact checkers”.

In many cases, it’s not determinable. But these conclusions in that paper are drawn in such a way that those academics feel very strongly. They’re inappropriate because the database didn’t establish unequivocal linkage between the event and causation from the vaccine.

They seem to be saying that the symptoms reported are unrelated to the Vaccine.  That implies people would have had these problems anyway.  Perfectly healthy young people would have just dropped dead for no apparent reason.

Too bad we did not apply such rigorous standards when classifying COVID deaths.  The plot below I have presented before.  The data has been updated with the StatsCan June 7th data release. 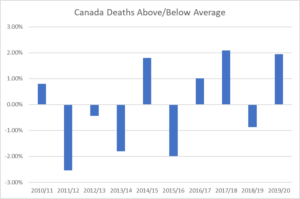 Can you spot the pandemic?  I certainly cannot.  The 2019/2020 winter in Canada was completely normal.  If we use the same standard to define a COVID death as the critics want used to define a Vaccination reaction, then NO CANADIAN DIED OF COVID.

Currently the VAERS data base in the US says that 6,985 people have died and over 400,000 people have had adverse side effects.  See below. 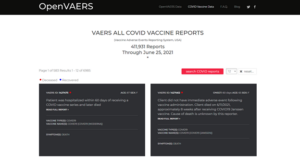 Numbers of this magnitude have not been recorded in Canada but if you think this is not happening in Canada, you are kidding yourself.  The only difference between Canada and the US is that Canada has far more control over the media than the US.  Canadians are not insulated from Vaccine side effects they are just insulated from the truth.

And the genesis of this whole thought thread was a two-hour conversation with a Canadian physician a number of weeks ago, where he just poured his heart out about what he was seeing with his patients and what was going on in Canada. And I was left saying, “Well, thanks for sharing this, but I can’t help you. I don’t have anything.”

So, a single Canadian physician has seen enough vaccine problems that he can speak for 2 hours about them.  I do not know about you, but I must have missed his CBC interview.

The interview finally gets around to discussing why we made so many mistakes.  Dr. Malone is a lot more charitable than I would be.  He attributes the mistakes to ignorance.

And that always has to happen at the start of an outbreak because there’s no data. Somebody’s got to have expert opinion. We’re past that point. We have a lot of data, and it’s time we start relying on evidence to make public health decisions, and we’re not doing it.

This is where I disagree (slightly) with the Dr. Malone.  Our level of ignorance was not high enough to explain this.   When this started, we did not have a lot of data about the SARs CoV-2 virus, but we did have a lot of information about respiratory viruses in general.  For instance, we knew that:

The infection reduction we have just seen was due to spring, not Jason Kenney.  That evil little troll is doing victory laps over what a great job he did.  Jason is a liar.  All he did was make things worse.  You do not get credit for lifting restrictions that never should have been imposed in the first place.

Solving problems you caused, does not make you a hero.  This reminds me of an episode of the Simpsons.  Homer gets promoted to management and safety incidents go down.  He is a hero until someone points out that the incidents went down by the number Homer was suspected of causing in the first place.  Jason Kenney is Alberta’s Homer Simpson.

Outdoor activities in the summer are perfectly safe.  We never should have cancelled Stampede last year.  South Dakota went ahead with the Sturgis motorcycle rally last summer.  Over 470,000 people attended.  It resulted in 463 cases, none of them serious.  Naheed Nenshi (The mayor of Calgary who canceled Stampede) is a preening purple Idiot.

Prevalent asymptomatic transmission is most egregious lie the government has told.  People were getting sick without any direct contact with infected people.  The government had to either come clean and admit the air inside a building could make you sick or they had to lie.  If they admit Costco air is unsafe, they must admit none of the mitigation measures could possibly work.  What do you think they did?

Of course, they lied.  They invented asymptomatic transfer.  Once again, the SARs CoV-2 virus was different than any other respiratory virus.  This turned out to be a very beneficial lie for government.  If you cannot tell who is infected, you must be fearful of everyone.  The only way to stay safe is to avoid people.  If people do not meet, they do not sit around discussing how politicians are evil bastards.  Closing bars also really helped with this thorny problem. 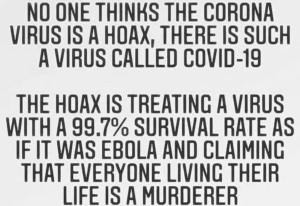 Dr. Malone ends the interview with this ominous warning.

Cultures decide that it’s okay to bend the rules on some fundamentals of ethics, whether it’s torture, internment of populations, whatever. I believe they almost universally end up regretting it.

We have not just been bending the rules.  We have been disregarding them completely.  Our governments have been completely lawless for 16 months now.  That should scare the shit out of everyone. 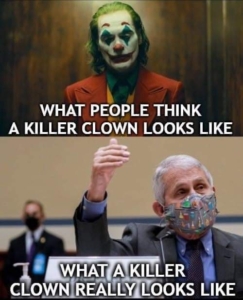