The mayor of Ottawa declared a state of emergency yesterday and the police moved in and stole private property.

Some truck convoy protestors seem stunned at this display of force, presence of carbine rifles. I will say I did not see police lay hands on anyone. No arrests here- just fuel seizure pic.twitter.com/4robjohvir

We are in this mess because of these fake emergency declarations.  There is obviously no emergency in Ottawa just as there was never a COVID emergency anywhere in this country.  The incredible thing is that the various emergency measures acts in Canada do not require the government to prove there is an emergency before declaring an emergency.  No vote or debate is required.

It is understandable that in a real emergency you need to act quickly.  Waiting for a vote might not be a smart instead, but how long should you be able to drag it out without any actual proof?  In March of 2020 every Canadian Premier declared a state of emergency when no emergency existed.  They have dragged on this state of emergency for nearly 2 years and at no time have we had an actual emergency. 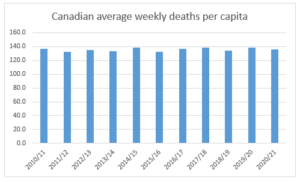 Can you spot the emergency?  When you adjust for our rising baseline (yes our world leading health care system produces more deaths each year) the last 2 years have been absolutely normal.  Of course our politicians will say the lack of an emergency was just the result of the emergency measures.  That is just another lie.  There is absolutely no evidence the restrictions saved a single life.  Quite the opposite in fact.  The data clearly shows that the number of deaths was increased by the restrictions. 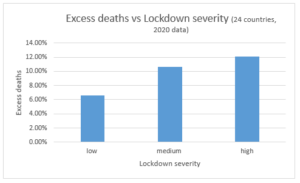 I have shown this plot before.  I was able to find 24 countries with data for both excess deaths and lockdown severity.  When I group them by lockdown severity, with 8 countries in each group, I get a very clear correlation.  This is exactly what the recent John Hopkins study found.  Every COVID death prevented came at the cost of more than one lockdown death.  The stricter the restrictions, the higher the body count.

We do not have rule of law if politicians can suspend rule of law any time they are inconvenienced or embarrassed.  The mayor of Ottawa declared a fake emergency and the Ottawa police broke the law on his behalf.  Confiscating fuel is theft.  Diesel is not a controlled substance.  Those officers stole private property and should be charged.

It is interesting that Police in Ottawa are allowed to confiscate diesel but they are not allowed to confiscate illegal, controlled, narcotics.  Ottawa has safe injection sites.  Addicts are allowed to carry illegal drugs in and out of safe injection sites without fear of police intervention.  The mayor of Ottawa welcomes junkies with open arms while harassing tax paying, law abiding, truckers.  I say let him have what he wants.  Truckers should refuse to deliver anything to the city of Ottawa.  The mayor can ask the junkies to deliver the freight instead. 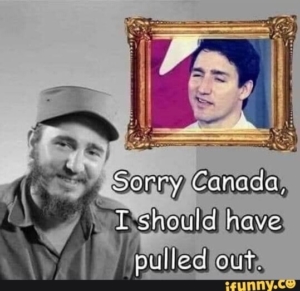 Subscribeto RSS Feed
A Canadian’s Guide to acceptable BeliefsThe Freedom Convoy has not caused an Emergency, they are trying to fix one
Scroll to top