3 days ago in my post “The Madness of COVID Crowds” I discussed the techniques tyrants use to subdue the public.  These techniques have been used many times by many tyrants.  The reason they continue to be used is they are tried and true.  They will work on the majority of people.  They do not, however, work on everyone.  There are always independent thinkers that will refuse to be deluded.  If you are reading this Blog you are one of those independent thinkers.

Bill C10 is a transparent attack on free speech.  Our Prime Moron has defended the bill by insinuating anyone who opposes it is a conspiracy theorist.

I agree completely.  I mean what reason could you have not to trust the only Canadian Prime minister ever convicted for ethics violations?  Obviously a child raised by an unrepentant liar and a drug addled lunatic would inevitable become a paragon of virtue.  Throw in that he is likely the spawn of a communist Dictator and you have the perfect human. 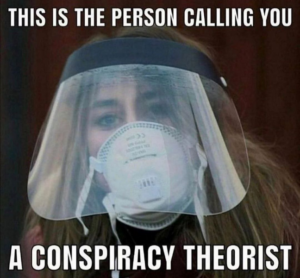 Governments are trying to marginalize independent thinkers by not allowing them to communicate on the internet.  But governments know that the internet is a hydra.  Absolute control is difficult to impossible.  That leaves Violence as their remaining option.  Violence is easiest with a weapon.  The government’s weapons are the police and courts.

On paper the police and courts are an independent arm of government.  In practice this does not happen for one simple reason.  Judges and police chiefs are appointed by politicians.  There was a time when politicians made appointments based on merit; those days are well behind us.  No one gets a senior judicial or police appointment now without the correct political allegiance.  That is why we have seen such a rapid deterioration of these institutions.

In the past week we have seen provincial governments signal that they are preparing for violence.  They have asked for and received injunctions barring political protests.

Incredibly in Alberta this was done in secret.

Could it be any clearer that the government completely distains the constitution and citizens?  Do you still think this is about a virus?

Unfortunately some police agencies like the Calgary Police service have signaled that they are all in for the tyranny.  I am going to an illegal protest today.  The Police Chief has no doubt instructed the rank and file to arrest dangerous free thinkers like me.  Thankfully, it is not the police Chief that arrests people.  Whether I get arrested will be determined by the rank and file.  Police Chiefs are unelected politicians but the average officer is not.  Most who become police officers do not want to terrorize people they are supposed to protect.

Unfortunately we have already seen that some officers are willing to enforce clearly unconstitutional orders.  To those officers inclined to cooperate with this tyranny, I have something you should think about.  The Pandemic is over; we have not seen any significant excess deaths since the spring of 2020.

So why should any police officer think about this?  Let me explain.  Last March we did have a problem.  Yet at the peak of the pandemic police were instructed to allow Black Lives Matter protests.  A central theme of these protests was to defund police.  That is a cute way of saying we should eliminate police officers.  The media enthusiastically repeated this message.  They also believe there should be no police officers.

During the peak of the pandemic police officers were ordered to stand down.  Police watched as protesters advocated for the elimination of their jobs.  This spring after the pandemic is over, the situation is far different.  Police are ordered to enforce unconstitutional orders.  Orders directed at people, like me, who overwhelmingly support the police.  Ordinary Police officers need to understand that the politicians and police bureaucracy hate them as much as they hate us.

This is not about a virus.  The police should not be a weapon the government can use to silence people who know that. 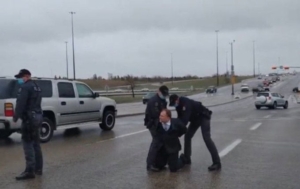