Justin Bieber is taking strength from his devotion to God and Jesus to get him through Ramsay Hunt Syndrome. I have sympathy for what Justin Bieber is going through but it was his own divided loyalty that brought this on him.  Maybe If the Biebs had more faith in the immune system God gave him and less faith in Trudeau, Biden, and Fauci he would not need to rely so heavily on God now.

Still I wish the Biebs well especially since he is considering suing Pfizer.  I guess Justin Bieber does not know that Pfizer has complete immunity and cannot be sued no matter how high the body count gets.  Pfizer might be safe from the Biebs but the vaccine narrative is not.  If a celebrity with Justin Bieber’s social media presence attempts to sue there is no way the media can cover it up.

In the fall of 2021 Nicki Minaj very publicly questioned the vaccines and was attacked on all sides by the media.  Things are very different now.  Nicki Minaj does not have Justin Bieber’s following and last fall it was still easy to deny vaccine injuries.  The sheer number of injuries and deaths makes that impossible now.  Almost everyone now knows someone who has been injured by the vaccines.

Yesterday I had lunch with 2 people I had only met the previous day.  I stated that I did not know anyone who had died from COVID but I did know people who I suspect died from the vaccine.  Incredible both my lunch companions had a similar story.  Neither man knew anyone who had died from COVID but one knew of a vaccine death while the other had helped revive someone who collapsed in front of him.  That person was in perfect health until their heart suddenly stopped and they were just fortunate to get immediate help.

The time is right.  If a celebrity like Justin Bieber attempts to sue Pfizer this vaccine house of cards could come tumbling down.  Justin Bieber is a very unlikely savior but he just might be the right guy, in the right place, at the right time. 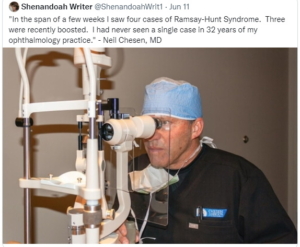