Communism and its evil twin socialism are the largest killers of the 20th century.  It is shameful that people flee communism only to arrive in the west and find it here.

Make no mistake we are closer to this than you think.  Canada has already signed the WEF “Agile Nations” agreement.  “Agile Nations” like Canada have agreed to set up digital ID to collect information which will allow the government to react more quickly.  Since the Trudeau liberals only concern is oppressing Canadians it is clear what they will react quickly to.

Did you know that the WEF has now somehow become an international agency that brokers agreements?  Klaus Schwab is a comic book character.  He is Dr. Evil of the Austin Powers moves.  We should be mocking him and instead Justin Trudeau sits down and signs agreements with him. Justin and Klaus may be comical figures but they are no laughing matter.

Justin is leading us down a very dangerous path to tyranny and Canadians who believe that this cannot happen in Canada are simply not paying attention.  This is already happening in Canada.  Not only did Trudeau order police to trample seniors with horses he also ordered the military to spy on the freedom convoy.  Canadians can no longer trust their police or military.  I am sure this is also something immigrants from communist countries recognize.  Justin Trudeau has corrupted our institutions.  The RCMP no longer get their man.  They only get the people Justin orders them to.  Justin’s only issue right now is identifying all the people he needs to persecute.  That problem goes away as soon as the digital IDs arrive.

Canadians have lost their way and they don’t even know they are lost.  Since the election of Justin Trudeau, freedom is disappearing at an alarming rate.  The COVID plandemic was used to eliminate every single right in the charter while at the same time new nonsensical rights were invented.  Canadian’s no longer have freedom of movement and association.  Property rights and the right of equal treatment under the law are also gone.  The government now dictates which, how many, and when visitors are allowed in our homes.  You can now be picked up on the street for the crime of upsetting Justin Trudeau.

Not to worry though, the charter has seemingly been re-written to include these new rights.

We are moving towards total government control of everything which is of course communism.  You know the thing that Justin Trudeau admires even more than his teenage students. 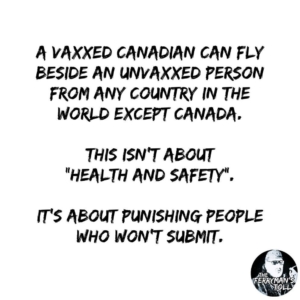