On the weekend Cochrane hit the magic number of 10 active cases which triggered their mask mandate.  This is all very reasonable because everyone knows that when 99.97% of your population is not sick, you are definitely in the middle of a plague.  The City Council of Cochrane voted months ago to set the 10-case limit, since that time they were given a presentation of data that showed how ineffective mask mandates have been.  They obviously ignored that data and were also not curious enough to check the province’s own website.  See the plot below. 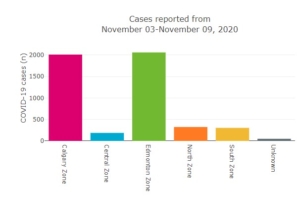 The vast majority of the new cases in the last week in Alberta are from Edmonton and Calgary.  Both cities have had mask mandates for 3 months.  Neither the mayor or any of the 6 councilors in Cochrane could find the time to look at this data and come to the obvious conclusion that mask are ineffective at stemming the spread of the virus.

The 7 people being paid to manage the affairs of Cochrane either ignored or did not understand the mask presentation they were given.  Not one of them was curious enough to follow up and look at data that is readily available and updated daily.  Voters have handed the responsibility of managing a significant urban area to a group of people who are either stupid or lazy.  When the mask bylaw was voted on 2 councilors did vote against it.  Both men voted against it not because they thought it was wrong but because they thought it was the province’s responsibility.  So, 5 people opted for empty virtue signally and 2 opted for passing the buck.  Inspiring leadership don’t you think?

If there was only 1 poorly chosen city council in Canada the country could survive but sadly that is not the case.  As covid cases are rising elected officials and unelected heath bureaucrats all over the country are going full lunatic, again.  It is almost like the are having a competition to show who can be the least scientific while screaming the loudest about following the science.

The current leader in that bizarre competition is the Manitoba provincial government.  Manitoba has locked down the province tight including a 25% restriction on grocery stores.  I do not know how that works, I guess 75% of people are not allowed to eat.  Starving 75% of your population to death in the winter is one way to stem an epidemic but I do not recommend it. 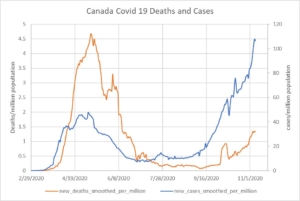 Covid deaths have increased from a low of 0.17/million in the summer to the current level of 1.34/million, an increase of 1.17/million; scary right?  No not really.  It is normal for respiratory illness deaths to rise as winter approaches.  It is called cold and flu season.  Below are the updated deaths in Canada. 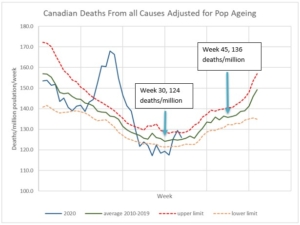 The green line is the average of the last 10 years in Canada.  Deaths in Canada normally bottom about at bout week 30 and then rise to peak out the first week in January.  We are now in week 45.  Every year in Canada deaths per million increase by 12 between weeks 30 and 45 so the increase in covid deaths is only 10% of what we normally expect at this time of year.  What we are seeing is a natural endemic virus not an epidemic outbreak.

Covid 19 is a coronavirus.  Coronaviruses are seasonal.  We are going to see deaths from Covid 19 increase every fall.  Covid 19 is here to stay and now just another virus that we must deal with in cold and flu season; pretending otherwise is just plain stupid.

When a new virus first hits the death spike is much larger than when it re-appears each fall.  We can see that in Canada’s numbers, the spike in April was much higher and sharper than what we are seeing now.  To be clear there will be some communities that experience sharp spikes in deaths this winter.  That is because, due to our geography, some communities in Canada did not see the virus in April.  Their first exposure to this virus might be this winter.  This could be a very tough winter for those communities.  It is criminal that the government prevented their exposure this summer when things would have gone easier.  The body count due to government ineptitude is sure to rise this winter.

Nothing that is happening right now is out of the ordinary and we should have expected it.  Viruses do not disappear and seasonal viruses like coronaviruses cause increased respiratory deaths every winter.  It would be nice if we could prevent that but if we have not been able to do that with influenzas and pneumonia what makes us think we can do that with Covid 19?  In April I wrote a letter to the editor of the Calgary sun in which I asked, “are we going to shut down the economy every cold and flu season”.  The Sun mocked me for that comment and here we are 9 months later shutting down the economy for cold and flu season.  9 months ago, something that we mocked is now government policy.

Subscribeto RSS Feed
AOC is Right We Need Nuremberg Type Trials, Just not for Trump SupportersNot Exactly The Blind Leading The Blind, The Same Net Result Though
Scroll to top