A teenager in Wyoming was handcuffed and perp walked out of high school for the crime of independent thought.

When asked why she chose to be arrested rather than comply this is what she said.

She is taking a principled stand even though she understands there will be repercussions.

“I get cussed out a lot,” she said. “People have called me mean names. Nobody has physically harmed me, but some of my best friends now won’t talk to me.”

“The discrimination from the teachers is just absurd,” Grace said. “I had one teacher who tried to force a mask onto my face.”

Here is the video of the police arresting her.

Stress does not change a person stress reveals who they really are.  Our governments have intentionally ramped up the stress and we now clearly see who people are.  Some like this young woman are brave and value freedom.  Unfortunately most adults have shown themselves to be selfish cowards.  They deserve what is coming. 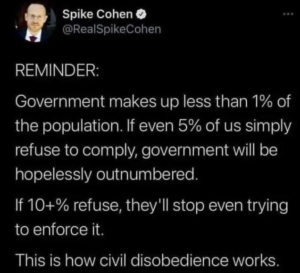 Subscribeto RSS Feed
There are many ways Government takes Lives.Australia just lost the only Cop worthy of a Uniform
Scroll to top