In his last comment Tyrel linked the video at the end of this post.  It is an interview with Geert Vanden Bossche and I admit I have not watched the whole thing.  I watched for about 40 minutes and then tuned out because I found it repetitive.  Geert was finding different ways to explain the same very simple but important point; what we are seeing right now with Omicron is not normal and we should be concerned.

Currently COVID infections are high but COVID hospitalizations and deaths are quite low.  Vaccine advocates say this is proof the vaccines are working.  According to them the key to our success is to jab babies as they are born and then every few months for the rest of their lives.  So are they correct?  As long as we keep people from Dying haven’t we won?  Yes we have won a battle but as Geert explains we are well on our way to losing the war.

In order to understand how we are losing the war we need to understand the difference between a normal viral outbreak and what we are seeing now.  Normally when a new virus jumps to humans not everyone gets infected.  Healthy people with high innate (nonspecific) immunity don’t get infected.  The virus can only circulate among those with compromised or weak immune systems.  The virus will move quickly through this subset of the population until it has nowhere to go.  Infections and transmission will fall as herd immunity is established.

The SARS COV 2 virus is not natural.  It was conceived in a lab and deliberately released for political/financial purposes.  Despite the unnatural origins it is still a virus and behaves like a virus.  There was a high level of innate immunity to this man-made virus in the general population.  Lab work and the real life example of the Diamond Princess indicated that about 80% of people would never get infected.  The virus really did not have many places to go and had we not vaccinated herd immunity would already have been reached.

We are still dealing with COVID because of the vaccines.  I will use the following plots of infections and deaths in Italy to illustrate that point.  The plots are all the same only with more time added to each successive plot.  Unfortunately the way the website works the y scale changes as the x scale (time) changes so it can be a little confusing.

The first plot shows the initial surge in the spring of 2020.  Deaths follow infections with about a 2 week lag and infections fall as summer arrives. 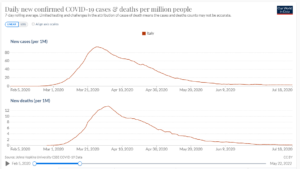 This was completely normal and at this point 0.4% of the population had been infected.  The first surge of the virus was cut short by summer so the virus did not have time to spread through the approximate 20% of the population that was susceptible.  It was highly predictable that the virus would reappear in the next season.  Herd immunity had not yet been reached.  This is what the next season looked like. 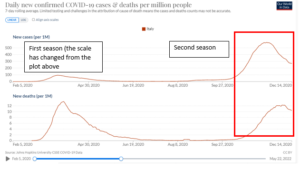 There were far more infections in the second season but only about the same number of deaths because the most vulnerable had already died.  The plot ends mid-December and the infections were already falling rapidly.  Approximately 3% of the population had been infected.  Add that to the 80% who never would have been infected and Italy was well on their way to herd immunity.  Infections would have continued to fall had governments not blundered in with vaccines starting mid-December.  The next plot shows the effect of the vaccines. 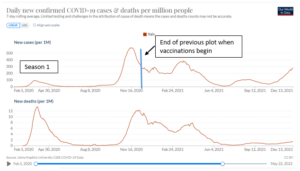 Cases stopped falling and even increased as more people were vaccinated.  Deaths eventually fell but cases remained much higher than they should have for off season.  By the start of the 3rd season 9.5% of Italians had been infected.  The virus should have had nowhere to go but instead cases exploded as can be seen in the last plot. 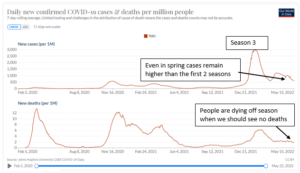 28% of Italians have now been infected and infections are continuing on in to the summer.  In the absence of the jabs this would not have been possible and COVID would have been over long ago.  The 28% number is not 100% correct though.  Also due to the Jabs, we are now seeing people get infected multiple times.  It is not possible to know how many infections are repeat infections.

Anthony Fauci wants you to believe that the Jabs are working because people are getting infected but not seriously.  In the interview Geert explains how the jabs are doing this.  It has to do the non-neutralizing antibodies preventing serious infections in the lower respiratory tract.  On the surface this appears to be a good thing but this is where we are losing the war.

The non-neutralizing antibodies may be preventing serious illness but they are actually facilitating mild illness in the upper respiratory track.  That is why we see boosted people are more likely to be infected.  The sheer number of infections still results in deaths.  Look at the last plot again.  It is summer, deaths should be almost zero and yet they are not.

The higher off season deaths are certainly a problem but the larger problem is that the vaccines are preventing us from reaching herd immunity.  Had Government not blundered in 80% of us would never have been infected.  Vaccinating everyone has changed that.  Every vaccinated person is not just susceptible to infection they are prone to multiple infections.  The virus will never run out of hosts.

Below is Geert with a more technical explanation for those so inclined. 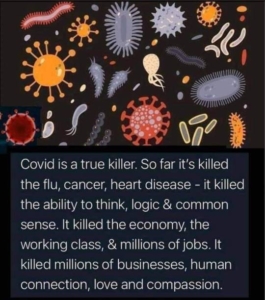 Subscribeto RSS Feed
Monkey Pox is COVID by another NameWhere is the Accountability?
Scroll to top