Our governments have failed us.  Most people have not yet realized magnitude of failure is and the government is desperate to keep it that way.  That is why government is going to such extremes to control information.  If people have access to information eventually most will discover things government would rather keep hidden.

Take inflation for example.  Inflation is a huge problem.  Rapidly rising prices are eroding standard of living and the hardest hit as always will be poor.  Government wants you to believe that inflation is not their fault.  They want you to believe the fault lies with Vladimir Putin and the war in Ukraine.

The inflation we see right now is the direct result of COVID policies.  Enormous deficit spending and destruction of the supply chain with over regulation got us here.  If we want to fix inflation we need to drop the regulations and stop printing money.  Inflation is caused by government and we will never fix it until we fix government.  The war in Ukraine has almost nothing to do with it.  Go ahead and be angry at Vladimir Putin but remember Putin is not the enemy impacting your life.  Your own government is.

The empty suits in legislatures and parliaments are largely too stupid to understand inflation but the script writers are not.  They know that inflation is caused by government policy.  They also know controlling information is vital to propagating lies and misdirection.  As long as you blame Putin for inflation you will never turn your angry towards the real culprits in government.

Retaining power and avoiding lynch mobs is contingent on controlling information that is why the US started a ministry of truth.  The ministry of truth will make sure that government lies will be forefront and truth will be hidden.  Thankfully not everyone in the US thinks this is a good idea.  If you want a cold hard slap of reality a good place to look is always Rand Paul.

It is not just the Biden administration that is desperate to control information.  This is a global phenomenon that the Trudeau government endorses whole heartedly.  Canadian bureaucrats always jump at the opportunity to extoling the virtues of Tyranny.  The spymaster general in Canada is fully on board.  So the guy who, by the nature of his job, knows all the dirty secrets thinks it is a good idea to keep you in the dark.  Thankfully average Canadians do not agree.

It is nice to see that average Canadians do not agree with government censorship but it is also unsettling to see how incredibly naïve Canadians are.  Canadians don’t want a ministry of truth but they don’t realize we already have one called the Canadian Broadcasting Corporation (CBC).  The CBC is the largest Media Company in Canada with access to unlimited taxpayer funds.  The CBC has long used their influence to misdirect Canadians.  Just yesterday a friend sent me this great example the CBC jumping to the aid of government.

The article is about the tragic death of a young woman.  So how does this article serve government?  Well think about it for a minute.  It is truly sad that this young woman died but why is her death worthy of national attention?  What is the purpose of this article?

An extremely fit, healthy, young woman just died suddenly from a pulmonary embolism.  2 years ago this was a very rare occurrence, now it is not.  Stories of young athletes dying are becoming common.  The more this happens the more people will question it.  The CBC is trying to get out in front of this to deflect blame away from government.  With this article the CBC is trying to normalize the sudden death of young people.  If they can convince you that this is normal and has always happened you won’t seek the truth.  A truth the government does not want you to know.

This young woman just graduated from Fredericton University.  A place where students had to be either vaccinated or regularly tested, something most students cannot afford.  What do you think the odds are that she was vaccinated?  Here is the truth the CBC wants to misdirect you from; COVID vaccines kill fit, healthy, young people.

Inflation is caused by government policy and COVID Vaccines can kill.  Don’t hold your breath waiting for the CBC to tell you that. 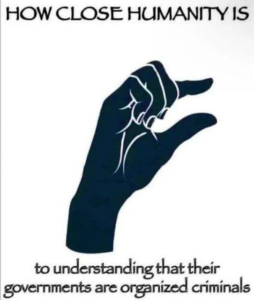 Subscribeto RSS Feed
In Canada the Communism clock is 4 minutes to MidnightIs it finally Time to Prosecute the Criminals?
Scroll to top