Canadians are sheep, we are blindly obedient to the Shepard of government.  The media pretends that there is a right and a left in Canada but there is not.  Politicians like Jason Kenney and Stephen Harper get labelled as far right but they are center left at best.  They are both big government, big spending leftist.  Canada is a country where all that exists is 50 shades of left.

That uniformity of thought brings uniformity of action.  Contrary to what you hear from the media Jason Kenney was not slow to implement COVID restrictions.  Jason along with the other premiers basically did the same things at the same time.  That means there is very little useful data coming out of Canada.  How do you compare the effectiveness of different mitigation programs when everyone used the same program?  You cannot prove a negative.

The US on the other hand is one big glorious mess.  There really is a left and a right and no uniformity of thought.  There was a spectrum of responses in the US that varied by state.  On one extreme is South Dakota that opted for 100% personal responsibility on the other is New York utilizing 100% government control.  This makes data from the US useful when trying to evaluate the effectiveness and damage from lockdowns.

A new paper has been published that does just that.  They ranked each state on economic, education, and mortality impacts.  For mortality impacts they did not just use COVID deaths they also factored in age adjusted excess deaths.  They found that higher economic impact from lockdowns lead to worse health outcomes (mortality). 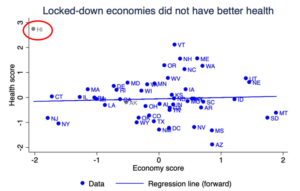 So shutting down your economy made things worse and not better.  They did find, though, that shutting down schools gave better outcomes. 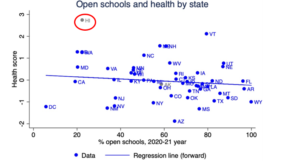 There is a big caveat on that finding however.  Take a look at both plots, Hawaii (circled in red) is anomalous on both.  If you remove Hawaii from the mix it makes the slope of the line change on both plots.  Shutting down the economy looks even worse and the slope on the education plot changes completely.  Instead of showing a decreased mortality by closing schools it shows increased mortality from school closures.

Hawaii is an island state that can easily control their borders.  Harsh lockdowns can work if you close your border.  We saw this in New Zealand as well but all you are doing is postponing the inevitable.  The virus will find its way in just as it has now in New Zealand. 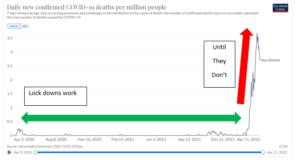 Even when lockdowns work they don’t work.  Theoretically a lockdown would work if you stopped all movement of people; if everyone was imprisoned in their own home.  But then the lockdowns would be the same as the mRNA vaccines; you will not die of COVID but you will die.  This is something the people of Shanghai are finding out the hard way.

The Chinese Communist Party has no regard for human life.  By some estimates the Chinese Communist Party has killed more than 100 million Chinese citizens.  The idea for lockdowns 2 years ago came out of China.  Why on earth would we follow their advice?  A better question is why would 32% of the adults in Canada vote for a moron who openly admires Chinese dictatorship?

I think the study authors summed up their results perfectly.

The states that tilted this balancing act toward more individual freedom and choice had far superior outcomes than states where politicians, government agencies and courts made these decisions for them.

Imagine that, individual freedom is the answer.  It seems that using your own judgement is superior to following edicts issued by unintelligent sociopaths in government.  This is something I am sure most Canadians will find very difficult to understand.  They just might take that lack of understanding to their graves next winter as Justin Trudeau emulates his Chinese communist heroes again. 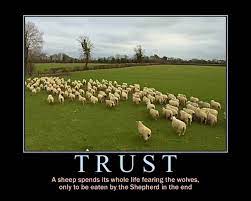 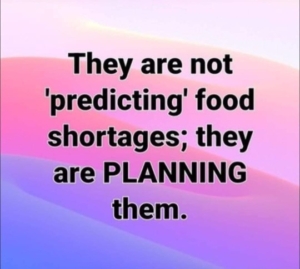