Al Gore, like all professional politicians, is a fraudster.  He was more successful at fraud than most of his compatriots.  Al made himself the high priest of climatology.  Al is not bright or scientifically illiterate.  Yet Al was still able to convince the world he had a unique understanding of climate science.

Al narrated a “docudrama” that that made weak minded people afraid of CO2.  After turning CO2 in to the biggest villain of all time Al founded a carbon exchange.  A carbon exchange is a place where you buy someone’s promise to reduce CO2 so that you can feel good about emitting CO2.  The participants literally buy and sell air.  Something that neither of them own.  Al sold the carbon exchange for over $200,000,000.

With this sale Al Gore claimed the title of the greatest snake oil salesman of all time.  I thought there was no way he could ever be outdone.  Now I am not so sure.  The Vaccine salesman are threatening to take Al’s title.

Lindsey Graham is a Republican US senator.  He has of course been fully vaccinated.  Lindsey just came down with COVID.  This is what he had to say about it.

“I started having flu-like symptoms Saturday night and went to the doctor this morning.  I feel like I have a sinus infection and at present time I have mild symptoms. I will be quarantining for ten days.

“I am very glad I was vaccinated because without vaccination I am certain I would not feel as well as I do now. My symptoms would be far worse.”

Think about this.  How does Lindsey Graham know his symptoms would have been worse without the Vaccine?  You cannot prove a negative.  The only reason he thinks it would have been worse is because the people selling the vaccines tell him so.  They could have injected him with sugar water.  Lindsey would still credit them for saving his life.

Al Gore convinced thousands of companies to buy and sell air.  Vaccine companies have convinced billions of people that getting sick is not proof their product does not work.  Fricking Genius.  I think we have a new champion. 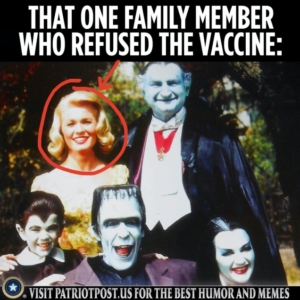