It does not matter how many people die from the COVID jabs, governments are still conspiring to get you to take them.  The latest attempt by the US government is by financing a study “proving” yearly boosters will reduce COVID infections by 75%.  Of course the media has already picked up the ball and is running with it.

I guess I would make a terrible “journalist” because my first question would be how do boosters prevent 75% of all infections when the original jabs failed to prevent a single infection?  Or my follow-up might be to ask if hospitals are now full of COVID patients who have taken boosters how will annual boosters be better than what we are seeing now?

Like all fake science this papers conclusions were based on modelling.  Antibody levels after the Jab spike and then fall quickly.  According to the researchers regular boosters will keep antibody levels high enough to prevent 75% of all infections.  I have a couple serious problems with their conclusions.  Research has already shown the type is more important than the quantity of antibodies.  I also want to know where they got their correlation of antibody level to infection from.

Most people now admit that the jab does not prevent infection even though it stimulates an antibody response.  So how will antibodies from boosters prevent infections when antibodies from the original jabs did not?  The focus on antibody levels is just a smoke screen to cover vaccine failure.  This is like the mask debate.  N95 respirators will filter out 40% of the virus; does that mean that N95 respirators will prevent 40% of all infections.  No it does not.  When tested they don’t prevent a single infection.

On the surface this paper appears to be just another harmless piece of Junk science but it is not.  Big Pharma is pushing government to change how vaccines are tested and this paper will be used as evidence.  The argument is that viruses mutate so quickly we cannot test for years because virus will mutate and the treatment will no longer work.  Instead Big Pharma only wants to prove the treatment stimulates an antibody response in order to get approval.

Big pharma wants to avoid the expense of lengthy trials and completely ignore possible vaccine injuries and long term health implications.  They want approvals based on antibody levels even though we know the mere presence of antibodies does not guarantee a reduction in infections. I can understand why big pharma wants this I just can’t understand why we would allow it.  The process now is already corrupted and woefully inadequate.  The COVID jabs were given emergency use authorization even though the abbreviated trials failed to demonstrate any benefit and had clear safety signals.

People were outraged when they learned that Pfizer did not test to determine if the jabs would prevent transmission.  That is not the worst of it.  Pfizer also did not test to see if the Jabs would prevent infection either.  Pfizer used the trials to claim 95% effectiveness but you cannot make that claim from their trial.  The Pfizer researchers did not do standardized testing.  Instead they only tested when a researcher suspected infection; and then they did not even do that.  85% of suspected infections were not followed up with testing.

This was, of course, deliberate.  Pfizer knew that it they did standardized testing it would show the virus circulating just as freely among the jabbed group as the placebo group.  Pfizer completely faked this trial and now they want to do away with trials completely.  The existing system did not work and now they want to make approval even easier.  People need to wake up and call out this fake science and the media that run with it.  It is being used to enhance big pharma profits and endanger your life. 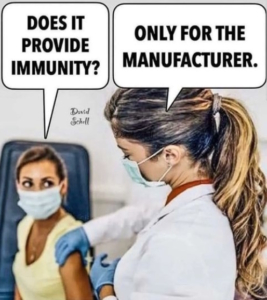 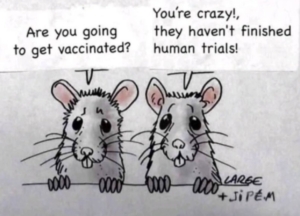 Subscribeto RSS Feed
Magic made possible by Math.If only the Government would stop Helping
Scroll to top