Recently on his program Bill Maher made a statement that I found very interesting.

“There are people who are going to vote based on COVID policy”.

God I hope he is right; I am one of those people and I hope I am not alone.

Every province in Alberta utilized harsh lockdowns and chose to persecute unvaccinated.  The damage that was done by these highly unscientific and completely ineffective polices may never be repaired.  One province, Alberta, was vilified by the media.  The rules in Alberta were constantly characterized as not stringent or timely enough.   Like everything else the media said about COVID this was a lie.

I live in Alberta but I frequently travel to the neighboring provinces.  I can tell you that Alberta’s rules were just as stupid as the rules in neighboring provinces; at times they were even more idiotic.  Restaurants were closed in Alberta when I ate in restaurants in British Columbia.  I got my hair cut in Saskatchewan when barber shops were closed in Alberta.  All three governments were equally stupid, the stupidity just spiked at slightly different times.  With respect to COVID there really is only one difference between Alberta and the other provinces; Albertans are not as willing to swallow government bullshit as citizens in other provinces. 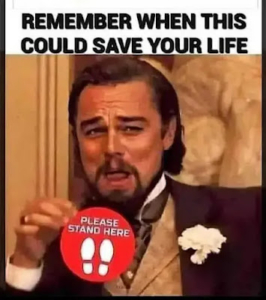 It was a constant struggle for Alberta Premier Jason Kenney to get Albertans to embrace the restrictions.  In every other province the Premier got a bump in popularity with every draconian rule.  The people in those provinces just could not get enough tyranny.  That did not happen in Alberta.  Every time Kenney ramped up the restrictions his popularity fell and he was just too stupid to recognize the pattern.  He should have changed course but instead he doubled down on stupid.  Kenney kept ramping up the rules in the hope of seeing the popularity bump his colleagues got.

Eventually Kenny’s popularity hit single digits and there was dissention in the United Conservative Party (UCP).  Kenney tried to placate the members by promising a leadership review.  I joined the party just to vote against that stupid, evil, little man.  Kenney barely won the vote but was still forced to step down. There is now a leadership contest in Alberta.  As a party member I am eligible to vote for the new leader and my vote will be solely based on COVID policy.

This might seem reactionary because COVID is just one of many issues right?  Well not the way I see it because COVID policies were never about a virus and my stance isn’t either.  I am using the candidate’s attitude about COVID as a barometer to measure their commitment to freedom.  Democracy and Capitalism do not work without freedom.  For society to survive people must be free to start businesses.  Consumers must be free to support businesses providing goods or services that they need.

All of this freedom makes capitalist societies very chaotic and uncertain because society is shaped by millions of decisions made in every corner of the world, yet somehow it works.  The data is very clear capitalism lifts people out of poverty, although unequally.  Socialist central planning on the other hand uniformly keeps people poor and always results in mass murder.  It seems people don’t like being poor but since socialism can’t solve that it is easier to execute anyone who complains.

COVID policy is the ultimate in central planning.  A handful of people in government determined;

Anyone who agreed with these egregious policies should never be given control over another human being.  As I stated many Albertans do not support this heavy handed government intervention but you would not know that based on the current UCP leadership race.  Of all the people vying to replace Jason Kenney, only one was not already part of his government.  That candidate, Danielle Smith, in a recent debate asked the others whether they would support another lockdown.  Only one other candidate answered no. 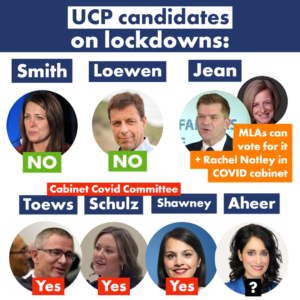 Three of the candidates, Toews, Schultz, and Shawney were in cabinet.  They were part of the small group that took away everyone’s freedom and they don’t see a problem with that.  This is irrefutable evidence that Canada is doomed.  The most freedom loving province in Canada is stocked full of communists at the highest level of government.  People who don’t think you have rights and do not care how many people their policies kill.

What makes these 3 even more disgusting is that one of their colleagues from northern Alberta was seriously injured by the COVID mandates.  Their Colleagues brush with death has not caused any of them to re-think their policies.  Had he died, his death to them would have been acceptable collateral damage.  You can’t build a communist utopia without piling up a few bodies.  Unlike these 3, I am not a big fan of either communism or mass murder.  So yes I am a one issue voter, and that issue is FREEDOM. 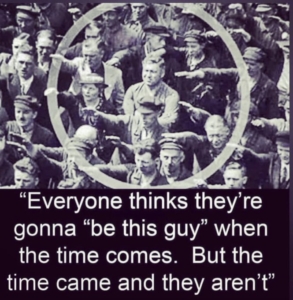