There is a flood of information coming out now documenting how vaccine effectiveness falls off with time.  There is a new study out of Israel that you can find here.

The study followed over 1 million vaccinated people monitoring for breakthrough infections. This is what they found. 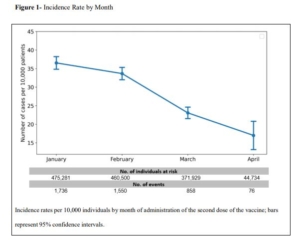 This is one more study confirming what I have been telling people for months.  The vaccines provide only temporary partial protection and will not prevent infection.  As I have stated before I am an Engineer trained in a completely unrelated discipline.  So how did I know this?  Am I some sort of Clairvoyant?  No I am not.  I am just someone who can understand high school science with enough curiosity to look.

I did not know how the immune system worked so I looked it up.  There are basically 2 types of cells involved, B cells (anti bodies) and T cells.  Antibodies attack the virus and are temporary.  T cells are the heavy hitters.  Not only are they permanent but they prevent the virus from replicating by destroying infected cells.

Next I looked up how the mRNA and Viral Vector Vaccines work.  They both do the same thing.  They reprogram some of your cells to produce the spike protein.  This provokes an antibody response to the spike protein.  One thing that struck me was that there really were no infected cells.  I wondered if that meant there was no T cell response.  I searched all of the literature I could find to see if any of them mentioned T cells.  All I found was one vaccine manufacturer stating their treatment “might” produce memory T cells.

I found this odd.  If we can find something as small as a virus why can’t we detect a much larger T cell?  Obviously they did not find T cells.  The Vaccine maker was just giving an answer the interviewer wanted to hear.  So from my own research and a little logic I was able to determine that without T cells these treatments would be temporary and would not prevent infection.  Or even disease for that matter.  The whole endeavor took about 2 hours of internet searching.

Lying is a habit for politicians.  It is their go to position.  They do it so often I think they don’t always even know when they are lying.  There is no way that they did not know that in this case.  When they told you vaccines would save you and end the pandemic they knew they were lying.  It was a big, expensive, deadly lie and they told it anyway.

Subscribeto RSS Feed
Prime Minister Trudeau is Concerned about Rights, Just not our RightsCovid Restrictions are part of a Larger Plan
Scroll to top