The source is the CBC which is your first clue that no truth will be allowed to sully the story.  The CBC is the largest purveyor of lies in the country outside of the confines of parliament and they do not disappoint.

Deena first starts with a small lie.  She tells us that we can’t feel safe because we still have the same number of people in hospital on the Jan 21st as we had the day the restrictions started on Dec 13th.  This is not technically true.  On Dec 13th there were 618 people in hospital with covid 19.  On January 21st there were 576.  We have already established that Deena can’t count so frankly I am surprised the numbers are this close.

The issue is not that Deena can’t count the issue is that Deena is just plain stupid.  I mean really, why is it important that we now have the same number of people in hospital that we had 5 weeks ago?  What if that number was zero?  Would Deena have sauntered up to the mike to tell us that we are in grave danger because no one was sick before and no one is now?  574 is essentially zero.  It means 99.987% of Albertans are not in the hospital with Covid.

Deena then goes on to tell a whopper.  She says that our numbers have been trending in the right direction because the restrictions are working.  The CBC will never get let the truth get in the way of a good narrative but that is simply not in my nature so let’s look at the numbers.  The plot below is the testing % positivity.  % positivity is the best indicator of when the epidemic has peaked.  You can see the peak in late April lined up perfectly when new infections started to fall.  We hit our peak % positivity on Dec 3rd, 10 days before the restrictions took place.

The season re-occurrence of Covid had already peaked on its own without closing a single restaurant.

The one weakness in using percent positivity is that if you dramatically change the number of tests it can skew the % positivity.  That is why we saw the bump up after Christmas.  I have heard morons on TV say that this was because people were ignoring the rules.  No it was not.  It was because over Christmas we tested only 1/3 as many people which skewed the numbers.  That is how important testing is; we only do it when it is convenient.

The plot below is just this season. 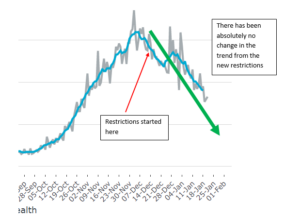 You can see from this plot that there has been absolutely no change in the trend since barbers and waitresses were forced in to unemployment again.  There is absolutely no evidence that any of these ridiculous restrictions have done anything other than make the problem worse.  When Deena Hinshaw claims that the restrictions are working she is loudly declaring that she is either stupid or dishonest.  Either way it galls me that taxpayers are forced to give this evil woman over $300,000/ year.

The Alberta government intends to drag this farce out for longer.  The CBC is only too happy to help them out with that.  Media in the US are on a different path.  See the NPR headlines below. 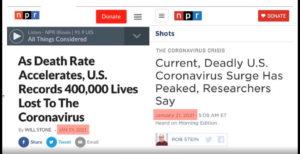 The outlook for Covid Restrictions in the US took a dramatic turn sometime between Jan 19th and 21st.  If I have done the math correctly the turning point was likely on the 20th, probably at about 12 PM EST.  It is rare that you can calculate the exact time an epidemic ended.  Covid truly is a virus like no other.  The crisis is over.  How did Deena miss the memo, or the data for that matter.

Subscribeto RSS Feed
Rules For Thee, Not For Me Lockdowns are Designed to Kill, What about mRNA Vaccines?
Scroll to top