The news has been full of stories lately about the surging Covid Cases in Ontario.  Ontario Premier Doug Ford has seen enough and yesterday he announced additional restrictions effective boxing day.  The plot below shows what everyone is concerned about. 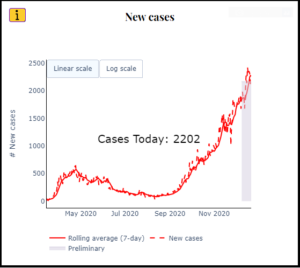 That does look alarming but curiously deaths are not really following the cases.  You can see the deaths below. 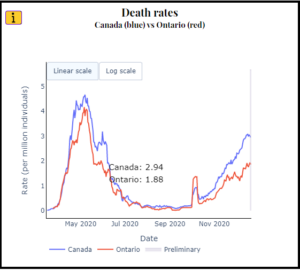 Deaths have increased but there were far more deaths in May from far fewer cases.  So what is going on?  If you did not immediately guess testing then you must be new to my blog.  Ontario does not have a surge in cases they have a surge in testing.  See below. 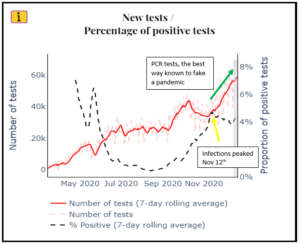 Ontario has dramatically increased their testing at a time when other provinces have not.  The dashed line is % positivity which is a great indicator of when the outbreak really peaked.  % positivity has been dropping since November 12th.  Doug Ford Announced new restrictions 39 days after the outbreak had already peaked.  Once again I have to ask the same question about Doug Ford as I have asked about countless Canadian politicians.  Is Doug Ford really that stupid or is he that evil?  With Doug Ford and Chrystia Freeland I instinctively go to the “that stupid” explanation but does it really matter?  Stupid or evil it seems to all end up in tyranny.

Doug Ford is not the only politician in Canada to impose restrictions after they are no longer needed.  In previous posts I have discussed how all 3 western provinces imposed additional restrictions also after passing their peak.  At the request of one of my partners in rant, I looked at Manitoba.  Guess what I found.  The plot below shows testing in Manitoba. 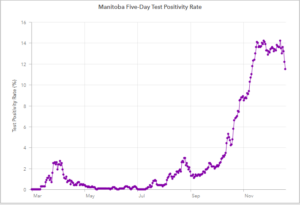 It is hard to pick the peak but Manitoba clearly past the peak in Late November.  Not to be left out Manitoba announced new restrictions for Dec 12th 18 days after the peak of the outbreak.  Every province from Ontario west has imposed unnecessary restrictions right before Christmas.  The eastern provinces may have also but I have not checked the data so I cannot say.

Since the premiers have blurred the line between ordinary stupidity and evil, I propose that we use a combined scale that treats those 2 attributes equally.  I am not sure if we call it stupidly evil or evil stupidity; I am open to suggestions.  While I don’t know what to call it I do know how to measure it.  I compared each premier by looking at how unnecessary their new restrictions were.  I counted how many days after the peak of the outbreak that new restrictions were imposed.  Here is what I found. 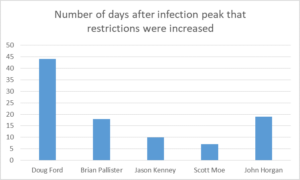 The clear winner is Doug Ford.  The clear losers are the people of Ontario.

It really is too bad that Ontario, the seat of our federal government, is not really in the middle of a deadly pandemic.  I have said many times, there is nothing wrong with Canada that the elimination of a few thousand politicians and senior bureaucrats would not solve. 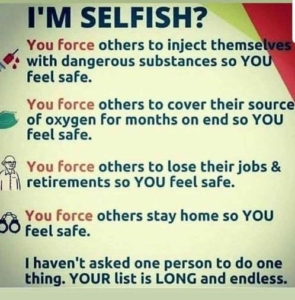