The plot below shows COVID cases per day for 2 different countries.  The Plot begins in September for and ends June 20th for both countries.  Country 2 has been time shifted by 10 days to line up the 2 infection peaks.  During the first season of COVID (the 2019/20 winter) both countries utilized lockdowns.  During the second season of COVID (the period the plot covers) one country used an even harsher lockdown while the other chose not to lockdown.  Can you tell me Which country locked down and which one did not? 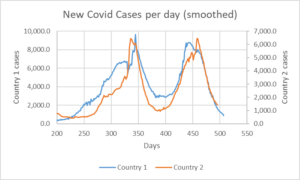 If lockdowns work, it is very difficult to explain this plot.  Both countries rose and fell in unison.  The obvious question is which country was smart enough not to use a lockdown?  Country 1 is Canada.  Country 2 is Japan.  After the first Lockdown Japan realized it did not help.  Japan did not lockdown a second time.  Canadians were not that smart.  Despite no evidence that lockdowns work we love them.  I have already marked my calendar with the day in October that I think our third lockdown will begin.

Notice both countries had a similar number of cases.  Japan was lower than Canada.  You might find this odd because Japan has 3.3 times as many people as Canada.  Lockdown lovers would say that Japan did not lockdown because they did not need to.  Of course, as always, the lockdown lovers would be wrong.

The virus was already in Japan.  If it took a lockdown to stop it in Canada, why did it not take a lockdown to stop it in Japan?  The real answer is that Japan had far more cases than this.  Japan did less than ½ as many tests as Canada.  Per capita Canada was 650% higher.  Japan understood that the only purpose for massive testing is to scare the public in to accepting a lockdown.  If you are not going to lockdown, you do not need to waste billions on testing.

Japan was smart enough not to destroy their economy and waste money on tests, Canada, not so much.  Maybe the Japanese are so much smarter than Canadians because the Japanese value science.  Canadians trusted the inane ramblings from Theresa Tam, Deena Hishaw, and Anthony Fauci.  The Japanese trusted Science.  Here is some work they did trying to understand how the virus spreads.

Japanese researchers followed a group of people testing them periodically for COVID antibodies. The group all tested negative for both antibodies and COVID at the start of the experiment and had no symptoms or contact with COVID positive cases for the duration of the study.  They were asked to go about their lives normally which was not difficult since they were not locked down.  This is what they found. 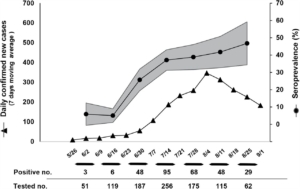 This study had similar results to other studies in Europe.  The difference was that the European studies were a point in time while the Japanese study tracked people over time.  The Japanese study clearly demonstrated that as the virus becomes more prevalent so does the presence of antibodies in the public.

Only 0.6% of Japanese tested positive for COVID yet in this study 50% of the participants must have been exposed.  The Japanese researchers surmised that their study group must have been exposed to asymptomatic carriers.  They concluded that asymptomatic transfer is far more prevalent than previously thought.  This is where I must disagree with the Japanese.  They did some great science and got to the wrong conclusion.

There is another explanation that fits the data just as well and does not require you to abandon previous knowledge.  The Japanese came to the wrong conclusion because they were still operating under the assumption that you had to contact a person with the virus to get the virus.  This is not true for airborne viruses.  To contact the virus, you only need to share the same air and not even at the same time.  The infected person could have been in the same building days before.

This is just one more study demonstrating the folly of lockdowns.  During an outbreak, the virus is everywhere.  You cannot hide from it.  It also demonstrates how ridiculous our vaccination policies are.  Most of the people getting vaccinated have already been exposed and do not need a vaccine.  There should have been some sort of antibody testing done before administering a vaccine.  It took Alberta about 3 months to give 70% their first dose.  If we targeted only unexposed, they would have all had their second dose within weeks. 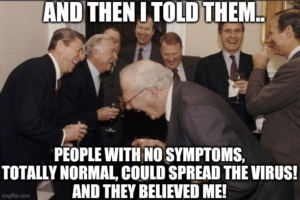