A Friend of mine sent me these 2 posts from the same author.

18 Reasons I Won’t Be Getting a Covid Vaccine (deconstructingconventional.com)

17 More Reasons I Won’t Be Getting a Covid Vaccine (deconstructingconventional.com)

They are a good read but there really is not anything in them that has not already been discussed on my blog and that is the point.  Every sane rational person, regardless of their education, who looks at the data comes to the same conclusions.

Everyone who bothers to look comes to the same conclusions.  You don’t even need to look that hard.  You can spend hours reading papers and analyzing data, as some of us do, or you can just look to places that did not succumb to the madness.  Places like Florida. 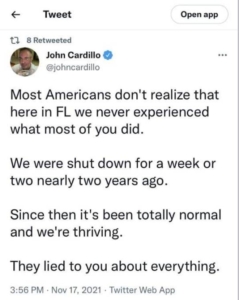 Florida initially followed the herd in to lockdown.  After 2 weeks when there was no apparent impact on the trajectory of the outbreak, Ron DeSantis decided to behave as a real scientist.  He tested his hypothesis that a lockdown would mitigate the outbreak.  He collected data that showed that was not happening.  Then like a good scientist he abandoned a false hypothesis and moved on.  As a result one of the few leaders in the world behaving like a scientist is constantly dismiss as someone who is not following the “science”.

That is what is so discouraging about this whole mess.  You do not need to spend a lot of time on the data to know that governments are wrong.  You just need to look at places that are doing things differently.  None of those places are having any more problems with the virus than we are.  They just have far fewer problems with Government.  Even a cursory examination of the data shows that martial law is not an antiviral.  Abandoning our human rights has not improved public health.  Eliminating individual rights only benefits government.

What our governments are doing is obviously wrong yet even after 2 years most people do not see it.  They do not see it because they simply have not bothered to look.  Ignorance is bliss.  A return to normal is thwarted at every turn by ignorance. 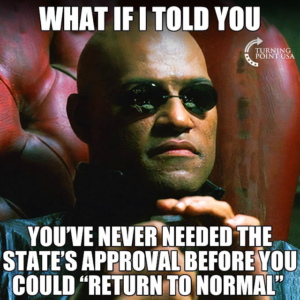 Over the holidays I had a few conversations with people about COVID.  I am not shy about sharing my conclusions so most people know where I stand.  When I speak to those people they often start by saying “I know you believe”, to which I respond that “it is not about belief”.  “These are my conclusions drawn by analysis of readily available data”.

Often these people will admit that I know a lot more about COVID than they do largely because they have spent absolutely no time on any research.  Still they insist that their beliefs should be given equal considerations to my conclusions.  When I point out that the data shows the exact opposite of what they believe they are unmoved.  Normally they challenge the source of my data.  When I tell them the source of the data they refuse to look while never producing any data to support their belief.  At best they point me to a news article that implanted their opinion for them.

For the last 2 years ignorance has been the most important tool in the government kit.  They fuel it with constant misinformation.  Misinformation that cannot stand up to 10 seconds worth of logically analysis but the government need not worry.  Most people will refuse to invest 10 seconds that might challenge their beliefs.  Willful ignorance is making this easy for government. 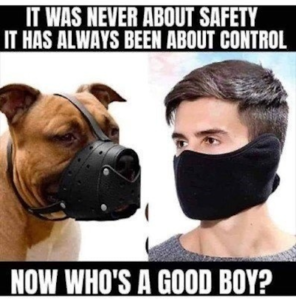 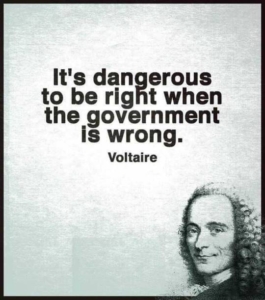