Within one hour of Joe Biden getting sworn in The WHO has released new guidance on how to use the PCR test.

Andy Swan on Twitter: “literally one hour after Biden takes the oath, the WHO admits that PCR testing at high amplification rates alters the predictive value of the tests and results in a huge number of false positives https://t.co/iDtXmappRw” / Twitter

It seems that after 10 months the WHO has noticed that the PCR test produces a lot of false positives and we really should be careful with the cycle threshold.  Really who could have known?

Then on the heels of this startling discovery Arizona had a sudden revelation.

One Hour After Biden is Sworn In, Arizona Senate President Releases Evidence of Voter Fraud (thedcpatriot.com)

While they were out search for a cure to covid they stumbled across evidence of voter fraud in the presidential election.

If I were a cynic I would say that it looks like some dishonest people used a faulty PCR test to fake a pandemic.  Then they used this fake pandemic as an excuse to use mail in ballots.  The recently discovered election fraud would have been way more difficult without the mail in ballots.  The whole thing fit together nicely.

Of course I am not that cynical.  I can’t believe all of this without believing that my government and the media lied to me.  Really, why would they do that?  It would be so out of character for them.  Of course, as an astute consumer of modern media, I would spot a lie like that.  I believe the media completely when they tell me 80 million Americans desperately wanted this senile pedophile for their president.

All that touching, kissing, and sniffing is way more American than the last guy.  He had dangerous ideas about free speech, freedom, and prosperity for everyone.  Americans really dodged a bullet with all these mail in ballots.  Fraud and the destruction of democracy was a small price to pay to get rid of a guy who often tweeted mean things.  It sucks that they also have to sacrifice a few children but hey it is worth it right? 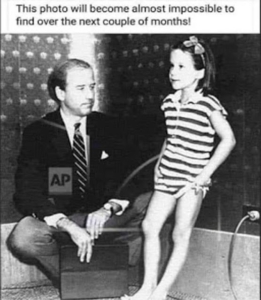 Subscribeto RSS Feed
More on the Scientific MethodWhich One is the Weapon, The Virus or the Vaccine?
Scroll to top