Some days I think COVID has driven the whole world mad.  Then I remind myself it is not the whole word, just the western world.  There are still pockets of sanity.  Mexico is one.  The Mexican president a few weeks ago declared Mexico would not be held hostage by the vaccine companies.  At the time that little bit of pushback felt good, but this is even better.

First a little backstory.  Indian doctors were routinely prescribing Ivermectin at the first sign of COVID symptoms.  This was working exceptionally well so the WHO stepped in and convinced them to stop in April 2021.  Cases skyrocketed, people died.  The policy was reversed and cases rapidly disappeared again. 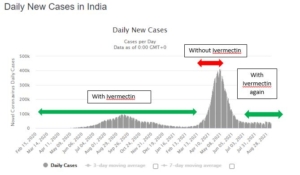 I originally discussed this on May 22nd.  At the time I listed a number of reasons why Ivermectin is superior to the vaccines.  There is one reason that was not on the list but should have been because it is the only one that matters.  Ivermectin works and the Vaccines do not.  See the plot below comparing India to 3 highly vaccinated countries. 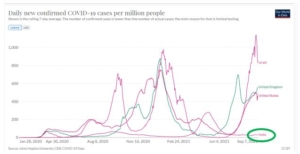 Developing countries like India Can’t afford the level of stupidity on display in Europe and North America.  In the west we force healthy people to take a dangerous and ineffective treatment to prevent a bad flu.  Indian physicians prescribe a common pill to sick people.  In the west when someone causes thousands of deaths we give them Emmys and book deals (Andrew Cuomo).  When someone uses lies and corrosion to get doctors to harm people we turn them in to folk heroes (Anthony Fauci).  In India when someone does those things they charge them with murder.

My heart leapt up when I read this story.  I never thought I would see the day when any of the architects of this fraud would be punished.  This is unlikely to ever happen in the west but the west is finished anyway.  Our wealth used to bring comfort and security.  Now all it brings is terminal rampant stupidity, 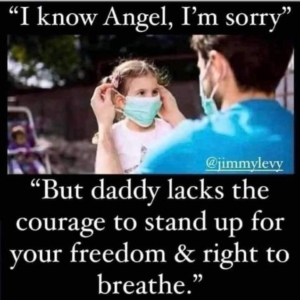 Subscribeto RSS Feed
“They” want to Vaccinate You, Repeatedly Governments are Preparing for a Harsh Winter
Scroll to top