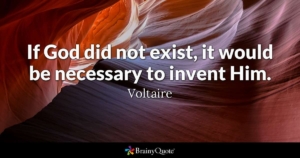 Voltaire was not questioning the existence of God.  With this statement Voltaire was simply observing that people need something to believe in.  We need to believe in good and evil and most want to believe that they are on the side of good.  That makes the opposite of this statement also true.  If the Devil did not exist, it would be necessary to invent him.  A more modern version of that would be that if the devil did not exist, the media would invent him.

Currently the world is firmly in the clutches of evil and I am not talking about Vladimir Putin.  I am talking about Klaus Schwab, Justin Trudeau, Joe Biden, Emanuel Macron, Boris Johnson, Jacinda Ardern, Bill gates, etc.  These left wing globalists are perpetuating evil on a daily basis yet we allow them to run amok virtually unopposed.  Why is that?

We can thank modern media.  We don’t focus on actual devils in our midst because the media has succeeded in inventing and even bigger devil.  That is their job after all, supporting evil and manufacturing opinion.  They don’t even mind telling you so.

“Elon is trying to control how people think. That is our job”. 😂😂😂 pic.twitter.com/NywLXXu8hz

Jason Kenney is a career Ottawa politician that moved back home to Alberta to take control of the only even marginally conservative movement in Canada.  Jason came on like a house of fire saying all the right things about freedom and self-reliance.  He was elected with a huge majority and then Albertans found out the hard way that Jason Kenney can’t even spell Libertarian.

Jason Kenney in theory is a conservative, in practice he is a Trudeau fan boy.  A big spending, big government, authoritarian control freak.  But still Jason was the only devil the media had so they still portrayed him as a dangerous right winger.  Throughout the plandemic Alberta was held up as an example of how not to handle an epidemic.  We were told that Jason’s non-existent libertarian instincts meant that Alberta always did too little too late.  The media reported Albertans were dying because of a selfish few who would not relinquish freedom.

This of course was a lie.  Jason slavishly followed his orders and did just as much damage to Alberta as any other Premier. 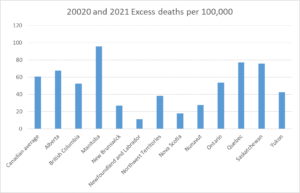 Jason Kenney did the same thing as everyone else and got the same results.  For the plandemic to date excess deaths in Alberta are 10% over the country average and below Saskatchewan, Manitoba, and Quebec.  All that non-existent freedom in Alberta didn’t kill anyone.

But still Jason was the devil until now when somehow he isn’t.  Now the national media is producing puff pieces on this former devil.  Jason Kenney is facing a leadership vote and suddenly the media likes him, the surest sign ever that Jason is simple part of the plan.  The media needs a devil but not a real one.  They know if Jason loses this fight a real conservative might emerge to take control of an important province.  They would of course demonize that person but they are still not willing to take the chance.

Look what happed in the US when Trump took over.  An outsider walked in and had things running better than they had in years.  All of the problems the media assured us could not be solved without the steady hand of government disappeared when the government interference disappeared.  It was that simple.  Just stop the government form doing stupid things.

Trump was dangerous and had to be eliminated.  Too many people were realizing that individuals can make better choices than government.  The American media and bureaucracy went to great lengths to get rid of Trump.  Now the Canadian media is pivoting and trying to prop up Jason Kenney.  That should tell Albertans how important it is to get rid of Jason Kenney. 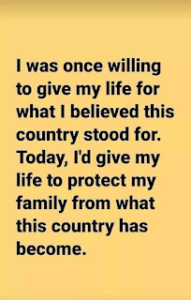