Yesterday I discussed how Israel is rushing to vaccinate everyone even though it appears they have already reached herd immunity.  Then this morning, I found this plot on Ivor Cummins twitter account. 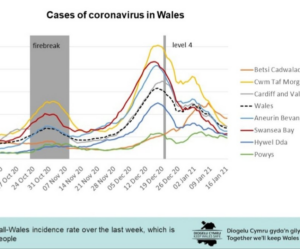 The evil Troll in Alberta enforced the second lockdown on December 13th (the red line).  This was 10 days after the infection had already peaked and was declining all on its own.

We can see this trend almost everywhere.  Shortly after the peak of the infection politicians rush to impose more stringent restrictions.  Once again I have to ask is this just stupidity or is it evil?  Is this just an under intelligent leader spurred to action by panic?  Or is it an evil leader trying to gain a political edge from a viral outbreak?

Any politician that fails to act within this window runs a terrible risk.  You cannot let the public realize that infections will fall on their own.  They might question why there were any restrictions.  So Politicians are faced with a choice.  Act and spin nature as the result of successful government policy.  Or, wait and have all previous policies exposed as unnecessary.  This is not about a virus it is about political survival.

That is how cynical and evil these people are.  If they can gain political advantage by destroying lives they will.  They are not even deterred when their policies kill.  Their only concern is if something can be spun to their advantage.

One thing that has been made clear through this manufactured crisis is that civilization is on the brink.  This is not just a Canadian problem.  Professional politicians all over the globe are sacrificing their own people and economies for personal gain.  It does not get any more evil than that.