Australia is in lockdown again over the Delta Variant.  This lockdown is not going as smoothly for the government as the last one.  It appears Australians are fed up with lockdowns.  This is a video of a Australians protesting the latest Government tyranny.  According to the news it was dozens of people attended.  The police admit to 3,500.  You can see for yourself It was way larger than that.

Protestors clashed with police during anti-lockdown protests in Sydney, Australia in defiance of public-health orders amid a growing COVID-19 outbreak https://t.co/ofqHtQTZMg pic.twitter.com/d5vhV096wo

What a difference a name makes.  You remember the delta variant right?  That is the dreaded Indian Variant that could not stand up to Ivermectin in India. 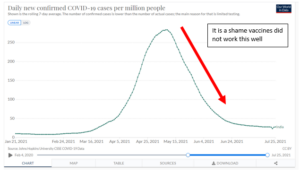 The 2 key ingredients that make Lockdowns possible are dishonesty and Stupidity.  Leftist western governments have an abundant supply of both.

Subscribeto RSS Feed
Thanks to COVID Mass Murder is OK, Saving lives is not. A Tale of 2 COVID Strategies
Scroll to top