Variants for viruses, especially RNA viruses like SARS-CoV-2 are normal.  Viruses always mutate because they replicate inside millions of bodies and the replication is not always perfect.  That is what made the strategy of scaring people with variants so easy.  You are 100% guaranteed to constantly have new variants.

When this strategy was first hatched the decision was made to label the variant after the country it was first identified in.  I guess they thought it made the variant seem exotic and somehow more dangerous.  Unfortunately the architects of the psy-op did not see the 2 problems with this nomenclature protocol.

The change from country of origin to the Greek alphabet also had limitations.  Delta had a successful marketing campaign but the next in line was gamma.  Gamma just isn’t that scary because popular culture uses gamma to describe a wannabe Alpha male.

Obviously a new nomenclature was needed.  After consulting marketing professionals the decision was made to make variant names sound like transformers.  That’s what brings us to Omicron.  I am shocked that they did not use Omicron Prime.  Either way I think they should get their money back from the marketing company.

How long will we continue to fall for this ruse?  Viruses always mutate.  There will always be another variant.  This is normal.  It is also normal that new variant will be more transmissible and less lethal.  This has been well document for other viruses.  If governments sat back and did nothing COVID would with time become just another cold.  For most people it already is. 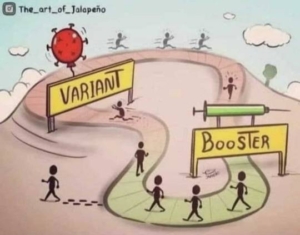 Subscribeto RSS Feed
Curing COVID is Easy, Curing Covid Delusional Syndrome might be ImpossibleOmicron should be the Final Nail in the COVID Narrative
Scroll to top