The English language has 171,476 words in current use and 47,156 obsolete words.  English arguably has more words than any other language.  It is surprising then that there are no words to describe the level of stupidity possessed by Jason Kenney and Deena Hinshaw.

Alberta has announced their second complete lockdown.  During the announcement every speaker commented that it was regrettable but necessary.  They all also opined that they were confident that we could break the arc of the infection because Alberta has already done it once.  Alberta Locked down in March and by May there were very few infections.  It was not the lockdown that did this it was summer.  These narcissists are taking credit for the changing of the seasons.  What would we do without them?

Lockdowns do not work.  You can go to Ivor Cummins website and see a list of 23 academic papers that all concluded the first lockdowns had little to no effect.  Some of the papers even concluded that the lock downs increased the spread of the virus.  Add on the deaths caused by the lockdowns and you would have to conclude that the first round of lockdowns were a colossal mistake; yet here we are again.

Even if Lockdowns worked right now they are not needed.  Alberta is only days away from seeing infections fall off without a lockdown.  I showed this plot comparing Alberta to South Dakota.  I have updated the numbers current to today. 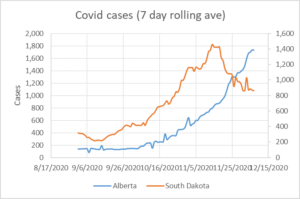 When I move The Alberta curve ahead in time the curves lie on top of each other. 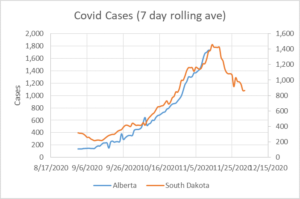 Alberta is only days away from the same point in the infection when cases started to fall in South Dakota.  And South Dakota is not the only place we see the same phenomena. 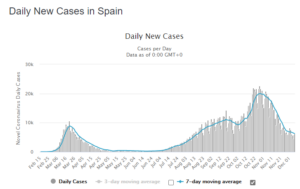 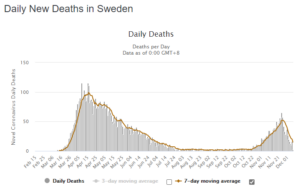 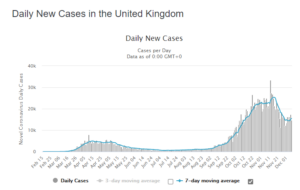 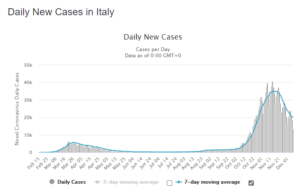 All of these countries have already peaked out in infections and deaths.  This early peak is not typical of a seasonal virus.  In 2018 influenza peaked at the end of January (week 5).  See the plot below. 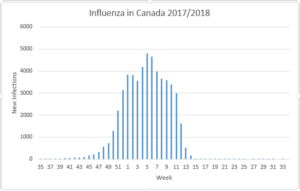 So why the early peak?  To understand that we need to think about epidemic vs endemic.  When a new virus arrives it can trigger an epidemic.  There is no herd immunity so many people will succumb to the virus.  As herd immunity develops the epidemic ends and the virus becomes endemic.  Endemic means something that is always around.  As I have said many times a virus does not disappear.  There was an outbreak of bubonic plague this year.  That is a virus that has been around since the 1300s.  You would have to be as stupid as Deena to think Covid 19 is going to disappear.

When a seasonal virus enters its endemic phase it re-appears every winter but the death toll is not as high as the epidemic phase because of herd immunity.  The death toll is never zero because people don’t stop aging or acquiring other medical conditions that weaken their immune system.  Our problem right now is that we never finished the epidemic phase before summer hit and stopped it.  Quite simply not enough people got sick last season largely because the virus hit in March when the season was almost over.

What we are seeing now is the tail end of the epidemic phase of the virus.  In a few days our infections will peak and fall off.  This was predictable; I discussed it back in June and reprinted that discussion on this blog.  Jason Kenney and Deena Hinshaw will injure themselves celebrating as they once again take credit for what nature did without regard for their stupid rules.

While those 2 disgusting individuals celebrate remember this.  They made this worse than it had to be.  I am not just talking about the unnecessary lockdown damage.  I am talking about what they did this summer.  Summer is a natural vaccine; in summer your immune system is strong and the virus is weak.  The virus does not go away but in the summer you will encounter a weak or low viral load because of all the UV light and warm moist air.  Viruses exist forever in cold, dry, dark areas and degrade quickly in hot, humid, bright conditions.  This summer we should have encouraged people to pack restaurants, bars, and patios.  The more people exposed to a weak virus in the summer the fewer people who get sick in the winter.  Instead we closed everything and cancelled Stampede.

There is no possible way that Jason Kenney and Deena Hinshaw could have handled this virus any worse than they have and they are not done yet.  The damage from Jason’s blundering has made him easily the worst Premier in Alberta history.  That is quite an accomplishment when you consider that he comes after Ed Stelmach, Allison Redford, and Rachael Notley.  We sure can pick them, can’t we?

Subscribeto RSS Feed
To Vaccinate or Not, That is the Question, the Answer is EasyThe Demonic Duo Must Go.
Scroll to top