I often accuse Canadians of not being able to learn from history.  That is not the case in New Brunswick.  Someone in their government has been studying soviet history quite closely.

In the 1930s Stalin was forcing farm collectivization.  Land was confiscated from private owners and they were forced to work on government collective farms.  Forced collectivization was opposed by the Ukrainian Kulaks who were successful farmers and did not want to give up their land.  Stalin was faced with a group of people who simply would not get with the program.  His solution was to starve them to death.  Before the 1932/33 winter Stalin sent in the Army and took all the food.  An estimated 8 million Ukrainians died that winter.  More than the holocaust.

New Brunswick Level 1: malls, grocery stores, salons have the option of requiring proof of vaccination from all patrons.

The Government of New Brunswick has now openly adopted Soviet Ideology and practice.  The only difference is that Stalin did not have to tip toe around centuries of legal traditions.  In 1933 the Soviet Union was a brand new country.  The law was fluid.  The government could change legal to illegal on a whim and often did.  Canada is different.  We have been around for 154 years and we have centuries of British common law behind our system.

Vaccine mandates and passports are clearly illegal in Canada.  That is why the government didn’t just send police to empty the pantries in every unvaccinated household.  Instead the New Brunswick government reverted to their established COVID playbook.  Coerce business owners to break the law on the government’s behalf.  Businesses are given a choice.  Continue to operate under profit killing COVID restrictions or help to starve unvaccinated people into compliance.

Business owners need to choose wisely.  The people assisting governments with COVID tyranny are not on the right side of history.  10 Years from now you will not be able to look anyone in the eye and claim you are sorry that you helped starve their relative to death.  That will certainly be the extreme but vaccinated people are already doing things they will not be able to explain to their children.  Take this woman for instance.

Nearly 20 months in and people have gone crazy.. I supported this cafe for years and even worked there as a teen…
I never thought I'd face discrimination like this from people I've know my whole life… 💔 pic.twitter.com/sLfXUxGfv0

She was denied service at a café that she had supported faithfully through the pandemic when the government was doing their level best to bankrupt restaurants.  The Café has rewarded her support by banning her and her daughter for being unvaccinated.  She is upset because she does not know how to explain this to her daughter.  She is not the one that needs to explain her actions.  It is the Café owner that has the problem explaining herself to her own children.

This is a growing problem.  A recent Canadian poll shows that most Canadians will not let an unvaccinated person in to their home.

Unvaccinated Canadians are willing to destroy friendships and family bonds to help the government ostracize unvaccinated.  When this farce is over and people finally accept that they were deceived by the government how will they apologize?  Can you even apologize for something this big?  You turned your back on friends over cold and flu season.  Talk about fickle friendship.

Anyone cooperating with government now needs to read a little history.  Cooperating with the Nazis or Soviets made life easier but no one that did that is considered a hero.  They were criminals who participated in an evil system.  The government could not have done it without them.  Is it even possible to wordsmith an apology for facilitating evil? 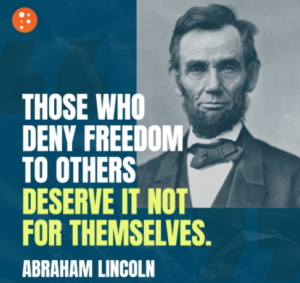