I came across a good video yesterday of a doctor discussing 2 studies about the effect of Vitamin D levels on Covid 19.  The video is linked at the bottom of my post but I must warn you the good doctor is not a very dynamic speaker.  I found it hard to sit through the video but the studies he discusses are incredibly important.

The first study determined that people with good vitamin D levels are 20 to 30% less likely to contract covid.  Unfortunately, as the good doctor points out, they did not have a high degree of confidence in the results.  The second study was far more interesting.

This should not be all that surprising.  Last spring Governor Cuomo went on a demented killing spree.  When he was done most of his victims were Black and Latino even though they make up less than 50% of the population.  This disparity has been recorded all over the United States.  The percent of Black Covid deaths is 2 to 3 times higher than their population percentage.  Black and Brown people living in northern latitudes often become vitamin D deficient in the winter.

We also see this when we compare Italy to Japan.  In Italy 89% of the population is considered vitamin D deficient, while only 11% of Japanese are.   3.5% of covid cases in Italy resulted in death but only 1.5% did in Japan.  Even this comparison is not exactly correct.  The Japanese did very little covid testing.  On a per capital basis Italy did 10 times as much testing as Japan.  The more you test the more cases you find, so the covid cases in Japan are likely way under reported.  That just makes the deaths/case even lower in Japan, which has the oldest population on earth.

The shocking thing about this whole farce is what a small problem covid really was.  Currently in deaths per capita the UK and Sweden are the 5th and 22nd highest in the world which sounds bad until you look at the 2 plots below. 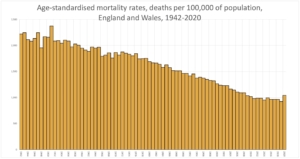 There really wasn’t much out of the ordinary in either country.  2019 was the lowest year on record for both countries leaving a lot of frail people who would have been susceptible to any virus.  2020 was slightly higher than average when compared to the last 10 years but completely average compared to the last 20 years.  In the UK some of those extra deaths were undoubtable caused by the lockdown.  Without a lockdown the UK would have been absolutely normal.

If we did not know how to test for covid, 2020 would be considered just a bad flu year.  The only thing we had to do to make 2020 normal, was give people Vitamin D.  The western world has wasted Billions of dollars on lockdowns, testing, and vaccines.  All we had to do was tell people to go to the drug store, buy some vitamin D and get on with life.  The stupid really does burn.