GB News is a small news outlet in Great Britain.  It really is a shame that more Brits don’t subscribe because Neil Oliver’s regular editorials are pure gold.  Here he is discussing how careful the British government is to not notice the elephant in the room.

Seriously, how many news articles can be written about mysterious, excess, sudden deaths without mentioning the bloody obvious; this did not happen before the COVID jabs. 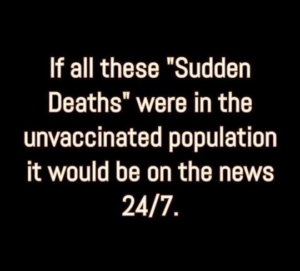 When the jabs started thousands of adverse events were reported to the US Vaccine Adverse Event Reporting System (VAERS).  This was very problematic for everyone because multiple papers had already been written detailing how VAERS grossly under reports adverse events.  The criticism of VAERS was that it was difficult to use so very few people took the time to use it.  In response to this the CDC developed a system as a cell phone app.  The system was easy to use but only if you wanted to report an event that was of no real consequence.

Respondents could check boxes if they experienced certain symptoms, but only 10 lower-level problems such as fever and nausea were listed as options.

The only easy options to choose were just nuisance events.  The CDC intentionally left the more serious events off the system.

The U.S. Centers for Disease Control and Prevention (CDC) didn’t include serious adverse events like heart inflammation on post-vaccination surveys even though the agency knew the issues could be linked to COVID-19 vaccines, documents show.

More serious events could be reported by choosing other and typing a response.  This made the app nothing more than a propaganda tool.  The CDC could claim the most frequently reported events were minor and no serious events were reported.  They would just be rolled up as “other” in the statistics.

The fact that the CDC developed a tool that intentionally obscured the prevalence of serious events is just one more piece of evidence that the regulators knew from the beginning that these products were not safe.  Before the first needle went in the first arm, governments knew people would be seriously injured and that many would die from their injuries.  This is criminal and the psychopaths behind it have not intentions of stopping.  Here is Tony Blair speaking at Davos.

Elemental evil of the war criminal – now become chief tyrant in a war against his own people and their inalienable rights:
"Digital Infrastructure to enable efficient Mass Coercion and Control" https://t.co/AfFgUxLDYL pic.twitter.com/ZM9fqsoWNk

Why are digital IDs necessary for new vaccines?  Is your digital ID going to administer the vaccine?  Of course not, there is only one reason to link digital IDs to vaccinations.  They plan on making new vaccines, which have not even been developed let alone tested, mandatory.  Stop and think about that for a minute.  These tyrants are laying the ground work necessary for forced injections of untested chemicals.  They are not even trying to hide it; they are discussing it on camera.

I am in agreement with the Davos organizers on one point.  Davos needs tight security.  A tight security perimeter should be built around Davos to prevent any of these lunatics from ever leaving.  Davos can become one big asylum for the criminally insane. 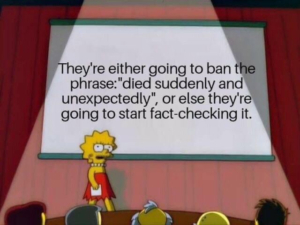