“What is there that is not poison? All things are poison and nothing is without poison. Solely the dose determines that a thing is not a poison.”

Even water can kill if you drink too much while very toxic chemicals can be survived at very low doses.  So what does this have to do with COVID?  For that explanation let’s start with this video a friend sent me.

“The spike protein is probably one of the most toxic proteins the human body has ever seen.”

Dr. Paul Marik explains the dangers of a buildup of spike protein in the body, from inflammation to autoimmune disease.

The spike protein is a strong toxin that attacks the body in a multitude of ways.  We likely still do not understand all the possible detrimental effects.  Like any toxin though it can be survived at low concentrations but not at high concentrations.  Unfortunately this is the fundamental problem with the mRNA vaccines; there is no way to control the concentration.

For more than a year Dr. Michael Yeadon has been warning about concentration problems with the COVID jabs.  There is no way to control how much spike protein any person might produce or for how long.  Every person will be different.  Some people will produce none while others may produce very large amounts.  There is also no way of controlling where the spike proteins are produced in the body.  The initial assumption was that it would only be at the shoulder near the injection site.  We know now that is not true.

So taking the COVID jab is playing Russian roulette.  You may produce little to no toxin and be perfectly fine.  Or you might be one of the unlucky ones who produce a lot of toxin for a long time.  Your body will poison itself with dangerous concentrations of the toxic spike protein.

Many Vaccine critics like Dr. Byram Bridle have opined that the vaccine programs should have been suspended the moment we discovered the spike protein was toxic.  I agree completely but I suspect the vaccine developers knew the spike protein was toxic before they injected the first victim.  It is hard not to see this as a grand conspiracy.  Fear was intentionally ramped up and liberty curtailed.  The only solution ever offered was the vax.  Then when it was apparent the vax did not work the solution was to take more of it.  There was no medical or moral justification for any of it so why did governments force it to happen? 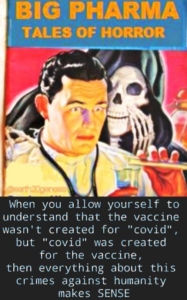 We can speculate about the motives of psychopaths like Trudeau or Fauci all we want but we will never understand them because thankfully we are not also psychopaths.  A better thing for us to understand is why did so many people allow this to happen?  The medical community stood mutely on the sidelines while the political elite attacked ordinary people.  Very few of them had the courage to speak out but thankfully that is changing.  19 Canadian researchers have sent a letter to Theresa Tam accusing her of jabbing people without informed consent.

Canadian Academics are hard left; when you lose them you really have lost control of the narrative.  The COVID farce is unravelling just in the nick of time.  Winter is approaching.  Winter used to be cold and flu season but for 3 years it has transformed in to Government tyranny season.  Finally there are signs that our Pandemic of irrational COVID fear has ended.  Now if we could just lower our toxic concentration of politicians, we might just survive. 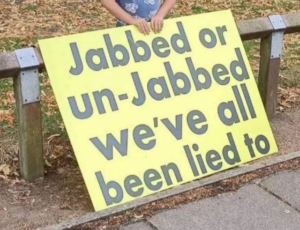