The longer this goes on the worse the jabs look.  Researchers are constantly discovering different mechanisms by which the jabs cause harm.  Normally I am quick to dismiss studies that show something is harmful.  Money has so thoroughly corrupted science that studies determining some substance is harmful generally turn out to be faked.  The fake studies are invariably financed by lawyers preparing a class action suit.  The COVID vaccine studies appear legitimate because they are distinctly different from the courthouse science I have come to expect.

To start there is no money in them.  You can’t sue Pfizer or Moderna with their seemingly evergreen emergency use approvals.  The absence of Tort lawyers significantly increases the odds the studies truthfully represent the science.  Lack of lawyers is a good sign but the real reason I believe them is the research is consistent with what we see in the natural system; I.E. people really are dying in large numbers.

I have mentioned before that I am an Engineer.  Engineers work with the real world.  Our job is to take reliable (notice I did not say proven) science and apply it to real world situations.  If my observations of the real problem do not match the purported science I don’t believe or use the science.  The scientists don’t have it right yet.

This is why I have been a skeptic since the beginning of this farce.  The “COVID science” did not explain what I saw in the natural system.  As an example, the virus was obviously airborne when I was being told that it transmitted by droplets.  There is simply no way the virus could have spread as quickly as it did if it was not airborne.

There were also times the “COVID science” directly contradicted Engineering principals I use every day.  An 80 micron filter cannot stop a 0.1 micron particle.  Putting a cloth mask with an 80 micron weave opening on a child is ridiculous.  The virus will sail through that like a mosquito through chain link.

So the studies come from what appear to be unbiased sources.  Their conclusions are believable and consistent with reported vaccine injuries.  Large numbers of people are dying.  Add the fact that excess deaths are directly proportional to vaccination rates and you have the perfect engineering storm.  As an engineer if I was confronted with all this information I would advise my client that the remedy is obvious.  Stop using the vaccines.

Obvious solutions unfortunately have no place in government.  An engineer would stop using the COVID vaccines based on the balance of evidence.  Politicians or bureaucrats will simple rationalize the information and force fit it to their ideology.  Thanks to a freedom of information request we know that is exactly what Bonnie Henry did.

Bonnie Henry is British Columbia’s chief medical officer.  She had the power to end the vaccination programs which is exactly what she should have done the minute she became aware of the severity of the vaccine injuries.  She did not do that.  Emails show that she received reports of injuries but her staff downplayed the link to the jabs.  Her response was never to ask for information or investigation.  Instead she accepted the ludicrous explanations and only instructed her staff to “continue monitoring”.

Is it just me or do you also expect more from the highest paid bureaucrat in the province?  In effect Bonnie Henry instructed her staff to continue watching while people die.  Forgive and forget is not an option.  We have emails that prove Bonnie Henry was aware of vaccine injuries and did nothing to prevent them.  How is she not complicit in murder? 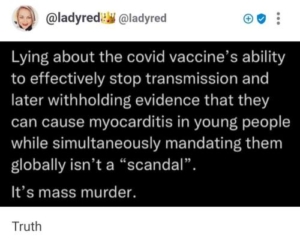 COVID will not be over until the guilty are punished.  There must be trials.  We need to know who knew what and when.  I for one look forward to Bonnie Henry’s trial.  I am sure her defense will go something like this.

Yes your honor I did pay the hitmen but my staff advises me that the bullets fired could not have possibly have been the cause of death; it was obviously long COVID.  I know this because everyone we shot died of long COVID.  If we had not shot all those dead people it would have been way worse; they were lucky we were there to help. 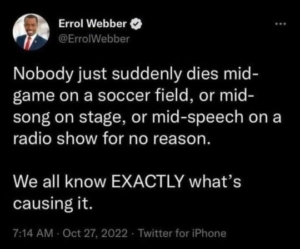 Subscribeto RSS Feed
Tsunami or Time Bomb the end result is the same.Lockdowns are as dangerous as Politicians
Scroll to top