The Public Health Agency of Canada has hired a contractor to do a deep dive on unvaccinated.  The contractor has been given vaccination records to identify and target unvaccinated Canadians.  Like much of what our government does this is illegal.   It is against the law in Canada to disclose private health information but our current Prime Minister believes laws are for the little people.  The contractor is to monitor the internet activity of unvaccinated Canadians.  Boy I can’t wait until they get around to me.

The purpose of the illegal spying is to determine what causes vaccine hesitancy so that they can craft a targeted propaganda program.  Typical government; a multi-million dollar fact finding mission instead of a few phone calls.  Trudeau doesn’t need to spy on me, he could just call and I will be happy tell him why I do not believe any of his bullshit. 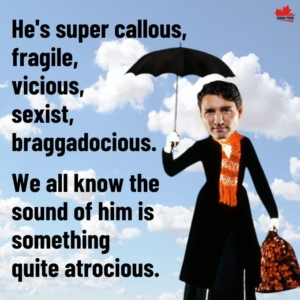 In other parts of the world people are discussing whether the vaccines are really worth using.  In Canada the Trudeau liberals are discussing the best ways to force people to take them.  I am sure a lot of time will be spent on scare campaigns aimed at parents.  Trudeau is adamant that every child should be jabbed.  Apparently the 23 children who died suddenly last month are well below his quota.

The relentless push to maximize Pfizer’s profits continues in Canada even as children are dying.  The psychopaths behind this know they are killing children.  I remember when Canadians viewed crimes against children as repugnant.  It was not long ago, but the ascendency of Emperor Justin has changed that dramatically.  Now the government hires consultants to help kill children.  Prison is too good for everyone involved in this crime.