I saw this article a few days ago.  Scientists have developed synthetic anti-bodies for covid 19.

The treatment was so promising in trials that the FDA has approved it for emergency use.  Add this to the rather long list of treatments for covid 19.  Covid 19 is proving to be the most treatable illness in history so why have so many died?  Government that’s why.  Governments love experimental so getting approval for synthetic antibodies is easy.  Getting approval for cheap solutions is quite hard.

Last spring the Canadian government threatened doctors who might be inclined to help people with inexpensive drugs.

Just 3 weeks ago the CBC did their part to support their federal paymasters.  They published this article explaining how Ivermectin needs more study before doctors be allowed to use it.

Treatments for COVID-19: What works, doesn’t work, and is still being tested | CBC News

That will come as a surprise to these doctors.  They have compiled a comprehensive review of all the available Ivermectin studies.

The bottom line is that Ivermectin is highly effective at preventing high risk people from being infected.  After infection Ivermectin results in dramatically quicker recoveries and lower mortality.  Like any drug the earlier it is used the better but Ivermectin even improved outcomes in severely ill people.

Aside from the dramatic results there were 2 other things of interest in the paper.  Many of the studies were published in the summer; before the second season of Covid.  These studies are months old so why does the CBC and the Canadian government think it needs more study?  Why is Ivermectin still illegal for use against viral infections in The USA?  The second interesting point might answer those questions.

One of the case studies came from Peru where a local governor distributed Ivermectin.  Deaths in his district dropped dramatically compared to neighboring districts that were not using Ivermectin.  Why did the neighboring districts not follow his success?  Because it was illegal to use Ivermectin to treat Covid 19 in Peru.  The governor disguised his intentions by claiming the Ivermectin was to help deal with worms.  He had to lie or he would have been prosecuted for not killing people.

Governments do not mind killing people.  Death is often just collateral damage of their agenda.  As of Thursday, 34 people had died in Texas because of windmills.  No Engineer worth his salt would ever put a windmill on an electrical grid.  Windmills exist because governments force electrical system operators to accept them.  The pursuit of leftist objectives are often deadly.  Governments never face repercussions because their friends in the media provide cover for them.  The bodies in Texas had not even been buried before the first articles appeared explaining why you can’t blame windmills.  These articles are complete bullshit.  If the grid in Texas was 100% coal, gas, and nuclear this would not have happened.

Governments believe they know more than Engineers when it comes to power infrastructure.  They also believe they can treat patients better than doctors.  People in government believe they possess divine insight that makes them more capable than ordinary mortals.  Unfortunately the only thing governments are good at is killing.  How many covid patients would be alive today if government had just stayed the hell out of the way? 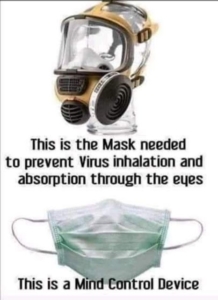 Subscribeto RSS Feed
The Only Thing That is Certain About Covid is That We are not All In This T... How Much are the Rights of Law Abiding Citizens Worth?
Scroll to top