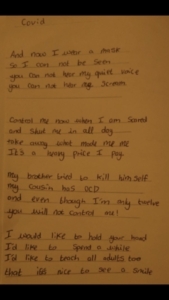 The author was described as a 12 year old.  Obviously this child has had enough of the covid lockdowns.  No motive was given but the child in this article made a statement by committing suicide during his zoom class.

REPORT: 11-Year-Old Dies After Shooting Himself In Head During Online Class | The Daily Caller

It was predictable that we would get here.  Many people have been warning about it.  1 Year ago If you locked a child in their home and denied them any human contact you would go to prison.  Now it is so common no one wants to talk about it.  For some bizarre reason we are willing to sacrifice children to appease a virus.  We are taking the lives of young people to combat a virus that kills nursing home residents who have lost the will to live.

Were the lives of these children worth it?  Did they give their lives so that others could live?  Below are some graphs showing how effective our interventions have been. 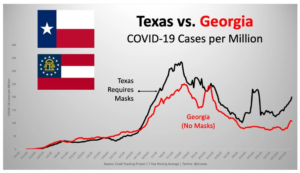 Texas tried to control the virus with masks.  If you did not know which state used masks could you tell by looking at the plot?

Now let’s look at Alberta and South Dakota.  South Dakota did absolutely nothing.  Alberta is in a second lockdown; here are their new cases with time. 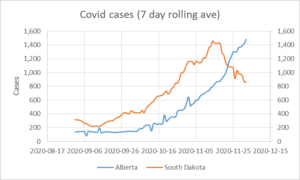 The curves look very similar don’t they?  If I shift the South Dakota curve by 20 days they lie right on top of each other, see below 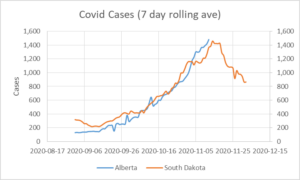 Again if I took the names off the curve would you know which one locked down and which one did not?  There is absolutely no evidence that masks or lockdowns have saved a single life.  There is plenty of evidence that these measures have taken lives.  We have driven children to the depths of despair and we have not saved a single Grand Parent.  Is every one proud of our group effort?  If we are all in this together are we then all responsible for the mental anguish we have caused?

I am never surprised when politicians prove to be unrepentant liars but even I am surprised by the pure evil on display right now.  How do we recover from this?  By allowing politicians to use cold and flu season as an excuse to kill people have we become complicit with those murders?  There are entirely too many hands with blood on them.