Ivermectin was widely available in Indonesia thanks to a wealthy philanthropist named Haryoseno.  He used his own money to make it available to everyone.  If you could not pay it was free.  On June 12th the government threatened him with 10 years in prison if he did not stop.  Cases skyrocketed until July 15th.  The government reversed their position allowing him to resume distribution.  The results were immediate.  Cases are plummeting. 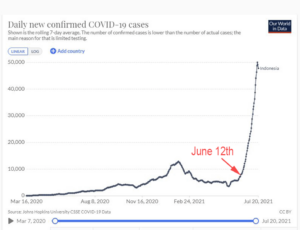 Imagine that.  A private citizen was threatened with 10 years in prison.  His crime was using his own money to save thousands of people.  Contrast that with this waste of Human flesh. 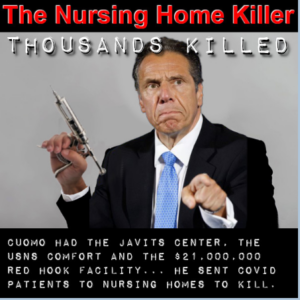 Andrew Cuomo used taxpayer money and the power of the state to kill thousands of elderly patients.  He was motivated by politics and his pathological need for attention.  According to the DOJ this mass murder does not warrant an investigation.

This is the world we live in now.  Mass murder is OK.  Saving lives without government approval is not.

Subscribeto RSS Feed
Any Benefit from COVID Vaccines will be gone by Cold and Flu SeasonThe Indian Variant by any Other Name is still Harmless, Until Government gets...
Scroll to top