I just finished watching an interview with Corporal Daniel Bulford.  Corporal Bulford is an RCMP officer currently assigned to the Prime Moron’s protective detail.  He is about to be paced on unpaid leave for being un-vaccinated.

The interview is quite long.  Most of the interview Corporal Bulford details how he approached his personal vaccine research the same as a criminal investigation.  He collected evidence from both Jab advocates and critics.  The results of his investigation were the same as mine.  The Jabs don’t work and are dangerous.

This struck home for me.  We are bombarded with the blanket statement that COVID jabs are safe and effective.  No facts just slogans.  When counter narrative facts surface, advocates don’t address the facts they just attack the messenger.

My wife has a running debate with a family member who is a dedicated member of the head in sand brigade.  When she mentioned blood tests show the jabs damage immunity by suppressing T cell activity his response was immediate and predictable.  Like a parrot he repeated “that is fake news vaccines strengthen the immune system”.  Notice that he did not address the data.  He just immediately branded it as fake.

Not only did he not address the data his response is both demonstrably wrong and irrelevant.  Not all vaccines strengthen the immune system.  Some do the opposite.  The blanket statement is only partially correct.  Partially correct also means partially false and completely useless.  Even if it were true that all vaccines strengthen the immune system how is that pertinent?  The COVID Jabs are not vaccines.  This is like saying all cars are safe as an argument for motorcycle safety.  A motorcycle does many of the same things as a car but it is not a car.

For me the last 10 minutes of the interview is very interesting.  We are often told that all federal employees must be vaccinated.  Like all blanket statements this is not true.  There are so many exemptions that 66% do not need to be vaccinated.  The RCMP do not qualify for those exemptions.   Canadians should be very concerned with this double standard.  The implications of this are ominous.

The Canadian government has been degrading the RCMP for decades now.  They have been using hiring quotas and politically correct training to ensure officers are social justice warriors not cops.  This has largely been successful.  That is why we have seen officers enthusiastically enforce obviously illegal and unconstitutional COVID restrictions.  Despite these concerted efforts some real cops have managed to remain undetected.  Vaccine mandates are the best way to identify and get rid of them 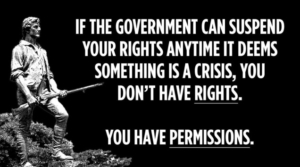 Subscribeto RSS Feed
Politicians are Following the Science, Their Destination is not what you th...This is what Truth Sounds Like.
Scroll to top