The history you learn is highly dependent on who writes it.  We learn what the author wants us to learn.  Given the chance Satan would write himself in as the hero in the bible.  I bring this up today because many prominent COVIDiots are now desperately trying to re-write COVID history.

The tide is turning and people are waking to the reality that the entire COVID narrative was a lie.  This virus was not an existential threat and nothing we did worked, including the vaccines.  The lockdowns measures stole 3 years of everyone’s lives and the vaccines have stolen far more than that.

This gradual public awakening has gotten several prominent COVIDiots scrambling to write themselves out of the failed government narrative.  2 weeks ago Leana S. Wen Penned an article for the Washington Post admitting COVID deaths were over counted.  Leana Wen is a little late to the party; I used all-cause mortality numbers more than 2 years ago to prove government was exaggerating the COVID threat.

But Leana is not just late to the party; she is an uninvited party crasher.  Leana Wen was one of the media’s favorite fake experts.  Doctor Wen made multiple television appearances hyping the danger of COVID 19 and the importance of complete, unthinking, government compliance.  Now that truth is emerging, Leana Wen is re-writing her character arch in this COVID farce.  Leena is no longer the courageous physician saving us from COVID by depriving us of liberty.  Now she is the dispassionate scientist observing from the sidelines and cautioning us about over reacting.

Leana Wen is a horrible human being who wants to be remembered as something she was not.

Another new history scribe is cartoonist Scott Adams.  Scott Adams thinks he is a very smart man but in the end he was just another COVIDiot with a large soap box to stand on.  Adam’s went all in on the Jabs and looked down on anyone who dared question the deification of Pfizer.  Now Scott is worried he might succumb to sudden death.

Adam’s used twitter as his pulpit to push the Jabs.  Now he is trying to use twitter to absolve himself from taking responsibility for his foolish decision.  He desperately wants people to know none of this could have ben foreseen.  No one could have known the Jabs were dangerous.  He was just a victim of faulting science.  The new Musk twitterverse has not been kind to Scotts attempt to whitewash his stupidity.  I was going to reproduce some of them here but there are far too many, suffice to say Scott is not fooling anyone with his historical re-write.

Scott Adams was very publically wrong and now he is trying to blame scientists for misleading him.  He refuses to take responsibility for his personal decision to get jabbed and he is not the only one.  Yesterday my friends and I discovered this article.  Incredibly, the author is trying to blame unvaccinated for her decision to get vaccinated.  The article is so wildly over the top that at first our group could not decide if it was real.  We felt it had to be a Babylon Bee satire.  As far as we can tell though the article is real; sadly there are people in this world that are this stupid.

At first I thought I would just quote a few words from the article and go off on my usual rant.  I could not follow that plan, however, because I could not decide what to choose.  Every single sentence written in the article is so astonishingly stupid I had to rant about all of it.  Below is the entire article with my comments in italicized bullet points.  I do not know who the author is; the article is unsigned.  That is not surprising, I wouldn’t want to admit I wrote it either.

They knew: why didn’t the unvaccinated do more to warn us?

The unvaccinated knew what we didn’t. Some of them said too little. Most said nothing at all. A lot of blood is now on their hands.

As the world struggles to come to terms with the devastating effects of the COVID-19 pandemic, one question that continues to surface is why the unvaccinated didn’t do more to warn us about the potential dangers of being injected.

While well intending citizens lined up, did the right thing, and received their COVID19 vaccinations — now seeming to do more harm than good — their unvaccinated friends stood by and let them do it. Some of them said too little. Some said nothing at all.

Even though they knew what we didn’t.

Our blood is now on their hands.

Those are strong words. But the unvaccinated had access to important information about the potential side effects of vaccines. They knew about the risks of severe allergic reactions, blood clots, and other serious health complications. They knew that vaccines did not immunize us. They knew it wasn’t effective, and that they can cause more harm than good.

They knew all of that, but instead of warning us, the unvaccinated chose to remain silent. They chose to look the other way and not speak out about the potential dangers of vaccines. They let millions of good folks who did the right thing (at the time) fall to death and disease, and many antivaxxers even gloated online about how their coin flip had been the right bet. The more diabolical even urged folks they disagree with to “get boosted.”

It has become all too clear. The silence of the unvaccinated was a dangerous, sociopathic, and irresponsible decision that has had serious consequences for those of us who received the vaccinations.

And silence is, after all, consent.

The unvaccinated should by any moral measuring stick have done more to warn about the potential risks — to help us make informed decisions about our health. And they must now ask us for our forgiveness.

And, hand to heart, we may just give it to them.

Because we are good people.

We took those injections because it was the right thing to do — until it wasn’t. 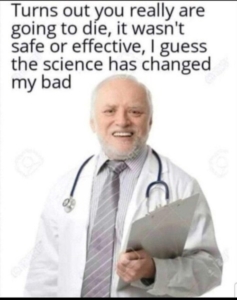 Subscribeto RSS Feed
One more important QuestionA Crime too big to Ignore, so why are we Ignoring it?
Scroll to top